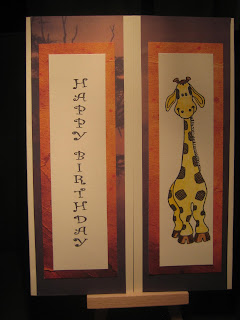 I just couldn't find a paper anywhere in my stash that I liked for the background and in the end opted for an African sunset downloaded from the internet rather than spend all day looking - never one for being very patient if the wind is behind my sails! The giraffe and sentiment were stamped onto cream card stock with a border of KanBan African Gold card in the most lush sunset/burned earth colour. I'm ashamed to say I've had the sentiment stamp for years - and it was totally pristine so I suspect had never been used - slap wrists! Then the cream A5 gatefold card had the centre of the downloaded African sunset picture added to the inside and then the left and right pieces which I'd measured and trimmed off went onto the opening flaps of the card before I added the image and sentiment. 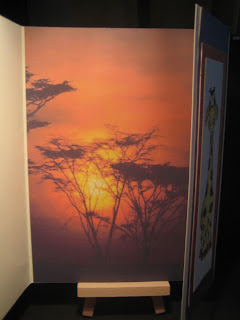 I know a purist might think that mixing a real life photo with a cute stamp is a bit odd - but I like it anyhow! Plus, I know just who it's going to be kept for - a friend who lived in Africa for a lot of years......and he also likes quirky things............which is just as well :))