Baptism card for a little boy 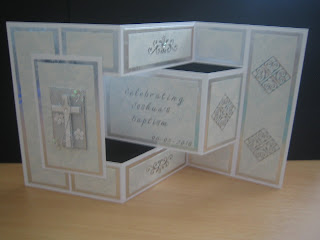 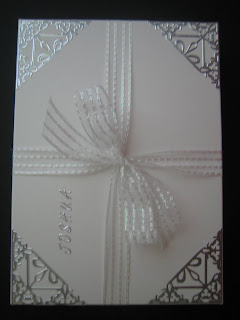 Our neighbours have a lovely little boy, aged almost two. Sunday was his Baptism day and, as he's a toddler rather than a babe in arms, I didn't want to make too babyish a card. So I kept it very simple with pale blue DCWV paper - layered onto silver mirri card with a sort of watermark pattern on it. I then used peeloffs and some bling for the rest, with the cross embellishment on the front all toned in. The colours haven't come out at all well in this rather blurred photo of the card but I spotted it too late and couldn't really go and ask for it back to photograph again! The box was just tickled up with peeloffs again and tied with some ribbon from my stash (Hobbycraft). Sorry, I've tried all ways to post the photo of the box right way up but it insists on flipping itself sideways...even tried fooling it by rotatating it so it looked wrong in the first place to see if it would right itself.....no luck so I think it sussed what I was up too!!

On the subject of peeloffs, I've read a few 'sniffy' remarks on people's blogs lately about them. Many people are proclaiming they've ditched them and 'moved on'...presumably to 'better' things. I know there are so many ways of doing lettering and wording out there, a lot of which I do use - but peeloffs do have their place....and until someone comes up with silver or gold ink refills for my printer I shall continue to use them where I see fit! Rant over!! :)