Ha! Here we go again with a new fortnight and my snippets card.

When this publishes, I'll' be at 'little Monkey Convention' in Swindon with my friend Helen. Heaven help us - it promises to be just a little bit chaotic to say the very least!

I had some problems when this post first published - for some reason I'd lost Megan's photo of her lovely card and also there was no link to her blog. Hope this is all sorted out now - here we go again!

Time was very precious in the lead up to 'Monkey Convention' and I made something quite quick - using two fabulous stamps so kindly sent to me by Megan. But first of all, we have Megan herself again as a Guest Designer as she then very sweetly made a brilliant card using the same stamps:

And this is what Megan said about her GD card:


I recently discovered Darkroom Door Stamps are a smallish Aussie company and purchased three sets of the same stamps… one for me and the other as a small thank you to Di for running the ever popular Snippets Playground, with an extra set for the toy box… spreading some love for one of our Home grown stamp company in the process. Miss Di was unaware that I had posted anything and I received an excited email after the surprise package arrived, with a huge thank you from Di.


I think Di does an amazing job running Snippets Playground and giving away so many prizes to all of the class mates all over the world. A Huge thank you to Di for all the fun and giggles and encouragement to use up those little bits and pieces from my scrap box along the way, and a huge Thank you for having me as a Guest Designer again.


On to my card, my Sister-in-Law started off my collection of spray inks a few years ago and I have of course added to them and spent some time making a mess, I mean creating a few backgrounds with them in various colours to set aside for later use making various sizes based on how much white paper and card I had laying around, from small 3 inch squares to whole A4 sheets. I used two spray inks for the main background Crushed Grape and London Blue and I’m guessing Cherry Pie and Lemon Zest on the butterfly all from Dylusions.
I stamped the butterfly directly onto one of the smaller pieces of cardstock and the sentiment onto another two white snippets (do they breed when I’m not looking???) and heat embossed them both with Black glossy embossing powder. I fussy cut the butterfly and sentiment out, laying them on the card before deciding to get out one of my stencils and some white ink to add more interest in the background, carefully inking directly on the card with the ink pad moving the stencil around so the pattern would be a little random. Another CCD die arrived around that time that I thought looked perfect for more interest and I used yet another white snippet to cut one, which was then cut in two pieces and placed behind the butterfly. I finally stuck everything down adding foam dots behind the butterfly to give some more dimension finishing off the card with a few sequins from a local discount store.

And this is my effort - not as good as Megan's (for a start it didn't even cross my mind to chop up the stamped sentiment!) but I did have such fun making it and just going a bit mad colouring the butterfly: 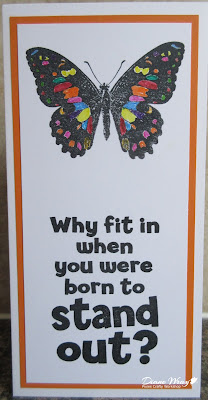 - a snippet of orange SU card for the 'border/frame'

- another snippet of white card onto which I stamped the image and sentiment - using Memento 'Tuxedo Black' ink - the Misti was a real life saver when aligning the stamps. The stamps are made by Darkroom Door and are clled 'Butterfly' and 'Stand Out'

- trimmed the centre panel down and then trimmed the orange border frame - just by a whisker!

- glued them together than glued the assembled panel onto the card front - and called it done!

Thank you so much for your really kind words, GD card and all the effort you put into this Megan - and of course this week's prize - with a little added bit from me as well: 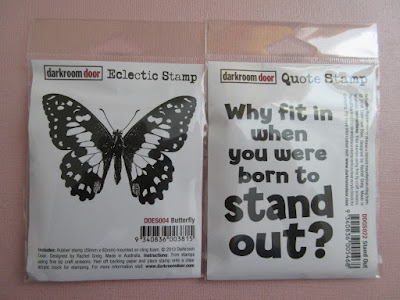 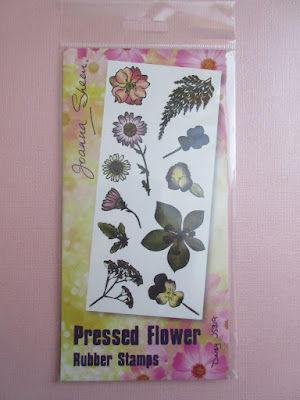 It's both of the Darkroom Door stamps - 'Butterfly' and 'Stand Out' (very kindly donated by Megan, all the way from Oz where they're made). Plus a set of Joanna Sheen stamps on plain grey rubber called 'Pressed Flower' from me - those have been in the toy box for quite a while so I thought they would make a nice addition to Megan's lovely donation.

The Snippets Challenge will run for two weeks and the Playground gates will close at 11am UK time on Saturday 16th September. The gates will open again at midnight UK time on the same day.

It's a maximum of ONE entry and please say in a comment if you wish to play and be a possible winner of the prize. The prize is the two Darkroom Door stamps plus the Joanna Sheen set together as a single prize, unless you really do only want to try for a 'split' - in which case I'd do a further draw for the other item. Please also link back to the Playground in your blog post to be eligible for the draw.

Be sure to call back next week to see the winner of last fortnight's prize (Memory Box die called 'Dragonfly stems - Left Corner' and Clearly Besotted's 'Say What?' set of assorted sentiments), another Guest Designer and my picks from the past two weeks.

Thank you for the feedback about a possible 'theme' in the Playground now and again. At some point we'll give it a whirl - but to make things easy (I like easy!!) you will still have the option of making an 'anything goes' snippets make instead. We don't DO stress in the Playground!