Craftyhazelnut's Christmas Challenge # 232 - Use some blue

I missed playing along last week over at Hazel's challenge, but went a little crazy this week and made six Christmas cards from some LOTV toppers, all featuring blue. They're so similar that I'll just show you the one - which does have the house in the middle a bit 'on the wonky side' leaning to the right. It's not me and my die cutting - it's the image itself 'cos the church roof is straight, but I like the quirkiness: 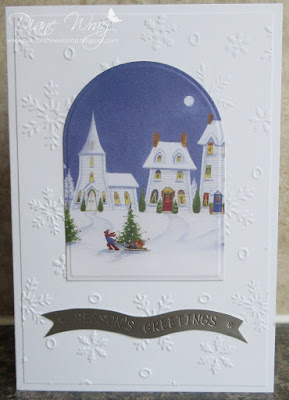 - half an A6 card (to get the perfect match for the shade of white), run through the Cuttlebug using the Darice 'Snowflake Background' folder then trimmed down a little before being glued onto the card front

- the image is from a set by LOTV that I've had for ages. I just couldn't visualise them on a card as squares with rounded corners (as they come) - light bulb moment, I die cut them using MFT's 'Rounded Banner' die. Just a case of jiggling the die around a bit on each image to get the best of the scene

- the silver 'banner' sentiment is ancient, from a load I bought when Lakeland Limited still sold a few card supplies

In-house critic likes the crisp clean look - result! And of course it pushed me closer to the target of making 12 Christmas cards a month. So far am keeping up - huff, puff :)

What a sweet scene. I think your of die for the main image is spot on -- it looks like you're looking out a church window.

Tis beautiful Di! I'm especially fond of the wavy sentiment panel in black! Eye catching, and beautiful, and would you like to make my Christmas cards for me this year? I'm lagging waaaaay behind! LOL

I may need that 12 a month challenge. I very much like this cool, clean holiday card, Di!

Very pretty and of course you could have had the houses straight and the church spire crooked! Love it as it is though. Hugs Mrs A.

A lovely pretty card Di, I love the LOTV image and the shape you cut it with. Well done for keeping up with your CC target, I am way behind with mine,
Jean x

Thanks for entering your lovely crafting (wow! six cards!) for CHNC challenge 232 - you could also enter this into my CHNC challenge extra for June - I'd love to see it there too. x

Six! Wow! You are on a roll...
This is so sweet. I like the wonky look of it...really fun and sweet.

The curved opening looks fab and loving that EF you chose.

It is quirky like when you use a bubble lens... wide angle thingy. Anyway, it is very cute and I like the shape you die cut with, like peeking out a window in Bethlehem.