Wow, what a lot of you played along this past fortnight - over 100! I imagine there could have been queues for the swings in the Playground :) We blithely refer to Parsnip - and one lovely Playmate asked me if he was a dog or a cat. For those who don't know, Parsnip is the softest, sweetest white teddy bear - given to me by a lovely Playmate a couple of years ago :)

Straight into my snippets card first, and it's an unashamed CASE of a card made by the talented Amy Rysavy HERE: 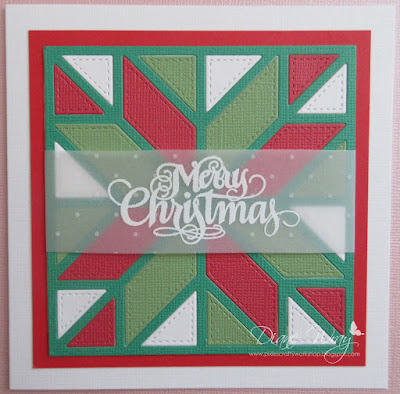 - a snippet of red card as the outer frame

- to assemble the patchwork I adhered the patchwork frame onto white backing card and then just popped in the pieces to build up the design (lots of spare pieces left over for more cards too!)

- the sentiment stamp is by PBX (F-1215), stamped onto vellum using VersaMark and then heat embossed with white embossing powder. I did find some plain vellum but this one with little dots on is much more translucent

And of course, whilst at it I made one more using some of the leftovers :)

Straight onto the picks for last fortnight and I'll have to scamper through as am off out shortly (Saturday): 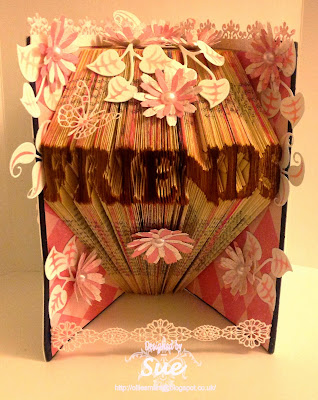 This absolutely fabulous 'word book' just blew me (and a lot of you playmates) totally away. It's my star of the fortnight and I'm sure you will agree - made by Sue J, it's a real work of art. Just wonderful! 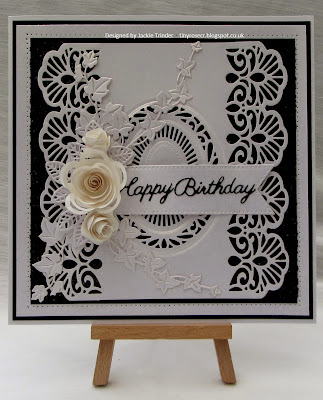 What a stunning Birthday card, made by Jackie T for a friend's 50th Birthday. It's absolutely beautiful! 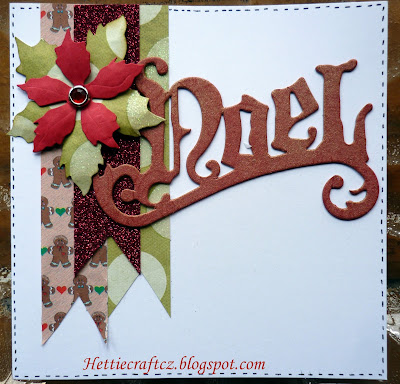 And my third pick of the week is actually several from the same Playmate - do hop over to Sam's blog and see the wonderful selection of Christmas cards she brought to the Playground! All different and each one is a work of art in itself.

Of course, I could go on forever with picks as so many of you came to play bearing such wonderful work, but time ain't on my side right now. Plus you can always go back to the post HERE which has the thumbnails so you can do some hopping about.

And, we had three new Playmates join us as well:

Anita (CiaoBella) brought this lovely butterfly card to show - great use of teeny snippets and don't you just love that sentiment too! 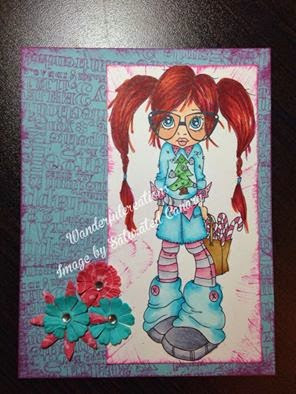 Wanda skipped in with this little cutie - could be one of our Playmates!?

And Steffi also came to play - but I can't pick up her card to show you as it's on Flickr. It could be that I'm missing a trick, but as I have to log into Flickr to comment I would have thought I could maybe copy and paste photos - ain't working for me though :(

Anyhow, a huge welcome to you ladies and I do hope you come back and play with us often. I have noticed that some folk just drop in the once - only hope we didn't scare them off :)

OK, onto the draws for those prizes - first up is the selection of goodies, the mountain valley stencil, the blending tools and the Lavinia 'Flower Fairy' stamp. And there's a little story behind this one too!

Sarn
First of all, I'm not sure if many of you notice, but almost every single week Sarn (Playground Prefect) says 'no thank you' to the prize(s) on offer. And many a time her number is actually picked by the Random Number thingy and I just have to move on and run it again. This past fortnight I was surprised to see that Sarn actually was keen to win - and I also knew that, knowing fate, she would have diddly squat chance of winning - and 45 of you wanted at least some of the prize.

Anyhow, I ran the generator and checked to see whose name it was - it was someone who didn't want to be in the draw so I got ready to run the thing again - and for some reason I suddenly spotted that we'd had a last minute entry anyhow so I was running on an incorrect number of entries. Little Eve had scampered in at the last minute and I just hadn't spotted it. So, I upped the maximum to 110 instead of 109, pressed 'generate' and BINGO - up came number 79! YAY! I'm always delighted for whoever wins each week - but this really did have me hopping up and down in excitement - Sarn actually introduced me to that stamp ages ago and apparently, from the comment she left, over time and a lot of use, her own one has split. The mountain valley stencil is on her wish list - and of course you can never have too many blending tools. All of this is in Sarn's comment so I'm absolutely sure you'll agree that she is a really worthy winner - plus she has given the Playground unfailing support over the past almost three and a half years since I took it over from Jules. Well done mate - couldn't happen to a nicer person, and your prize will be in the post to you this week! And I think you maybe owe Eve a hug :)

Right, onto the two additional prizes - those stamps made by Visible Image:
Sarah (Craft Nerd)
In fact, having just been back to Sarah's snippets post I truly don't know why I hadn't included her entry on my picks - just look at this amazing canvas! So much work and so many snippets too! 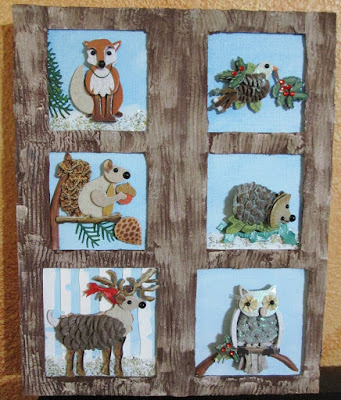 Sarah was playing to win the 'Isabella' stamp set. If you drop me an email with your address (di_wray@hotmail.com) Isabella will be in the post to you this week Sarah!

And the next choice is:

AJ wins the 'Tala stamp' set :) I think you liked both anyhow chick - I seem to have two addresses for you so could you please email me (di_wray@hotmail.com) with your address and I'll send Tala off to you this week!

And the prize this coming week is of course a Die-namics MFT 'Quilt Square Cover-Up' die of your very own, just like the one I used today. A great 'snippets buster' and a lot of fun to play with - not just for Christmas of course :) 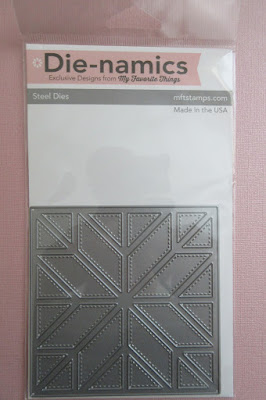 The Snippets Challenge will run for one week and the Playground gates will close at 11am UK time on Saturday 13th June. The gates will open again at midnight UK time on the same day.

Maximum of three entries and please say 'Yes please' (or similar) in a comment if you wish to play and be a possible winner of the prize. Do remember that you should also link back to the Playground in your blog post to be eligible for the draw.

Di and of course, Parsnip!

And this is Parsnip himself: 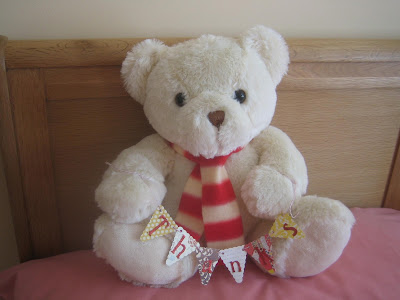