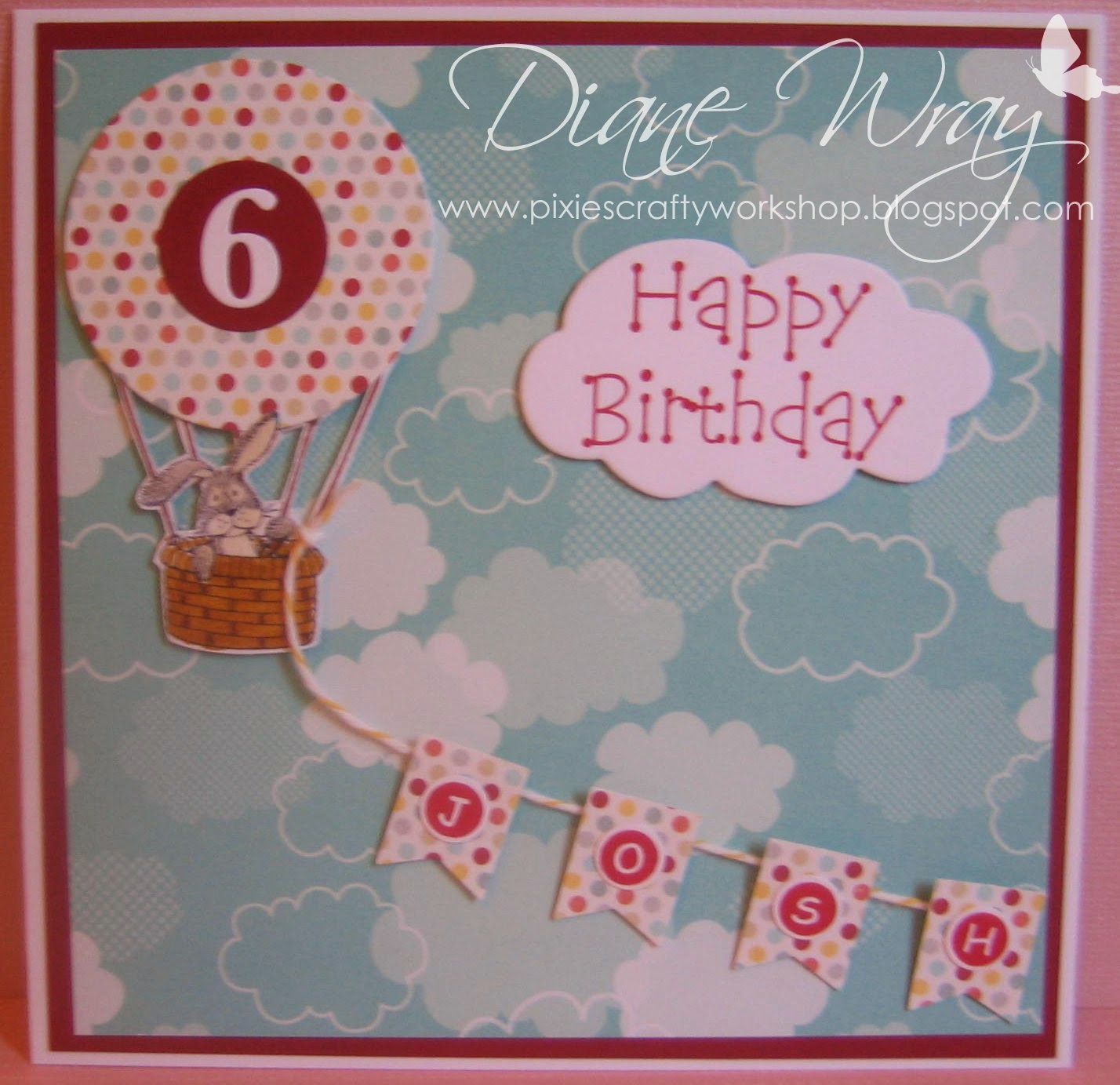 Oh I did enjoy this post! First, a darling card, so cute & how clever to personalize it for your young friend. It will be super special for him with his name & milestone age on it. I love the bright colors, perfect for any age, but especially a 6 yr old. Then I loved reading about your woes & how you fixed everything. Loved Warren's dimensional ear. Very clever, Miz Pixie. BUt then you always are! That's a cute Wabbit. I wike wabbits..but prefer the cartoon kind such as Warren, rather than wabbits who eat foliage. TFS & Big Hugs

Warren makes a great card for a 6 year old and the technique for getting your sentiment in the right place is very useful and clever. I love the cloud backing paper and the cute banner with the little boy's name on. Glad you managed to get the card back on track, sounds like a lot of work but worth it! x

This is another cute one! I love how you personalized it.

What a personalized Birthday card for your younger friend!!!
I love the backing paper and the tail added to the banner with his name on it!!!

Such a cute card, Di! Love how you incorporated the name!

Gorgeously cute card Di and I love the background and the vibrant colours. Hugs Veerle xx

I love this card - what a brilliant idea for adding a name! Great way to get the sentiment in the cloud shape too. I had to read the instructions through twice, but I think I've got it! LOL! I've got that paper somewhere and also the banner punch, so I think I might just have to lift this one...... xx

A great card and I'm sure Josh will love it. I've still got a few sheets of the cloud paper - was it really a freebie two years ago - how time flies!
Kath x

I'm sure Josh will just love this card - I'd forgotten all about Warren the rabbit he is so cute. Clever way you 'rescued' the balloon with dotty paper.

Just love this Di! So so sweet and fun! Perfect for a 6th birthday! Love the title too teehee
Lucy x

Good grief . . . a lot of work went into that card Di. I'm sure it sounded simpler when you started!!!

Nice touch to add the child's name to the card and sure to be appreciated.

What a brilliant save Di and I love the way the little ear overlaps the balloon! Some top tips here too - thank you :) Vicky x

Brilliant card, just love it and very cleverly put together.

Hi Di,
wonderful, wonderful, childs card.
It's just perfect of any child, and so bright and cheerfully designed.
I love every bit of it.
You sure do have a wonderful way with words.
I just wish I could say such lovely things when I post.
Lots of crafty love. Jenny L.

A super personalised card, I love the cloud paper and the name banner.
Jean x

This is so cute and so delightfully personalized!

I shall reread the directions after a wink of sleep. Slept overnight at the grandkids and the kitten was quite delighted to have someone new to torture with lack of sleep. The den where they have the hideabed has an open pass through window to the main hallway. I am debating buying them shutters for Xmas! teehee

And here's me thinking his name was going to be Warren!! Lovely fun card. Luv the wabbit.
Hugs Mrs A.

I love this card, Di, and you sure saved the day with the dotty paper :) I must admit to avoiding alpha and number dies - I don't seem to get on with them - but it is nice when you can personalise a little one's card. Hugs, Elizabeth xx

This card is just precious, and I'm so going to have to "borrow" your idea of adding a recipient's name to a banner! Love the whole card!

Awww, this is such a darling card Di! I love the papers you used on this one and of course the adorable stamps and dies. It just doesn't get any cutter than this one! Hugs, Brenda