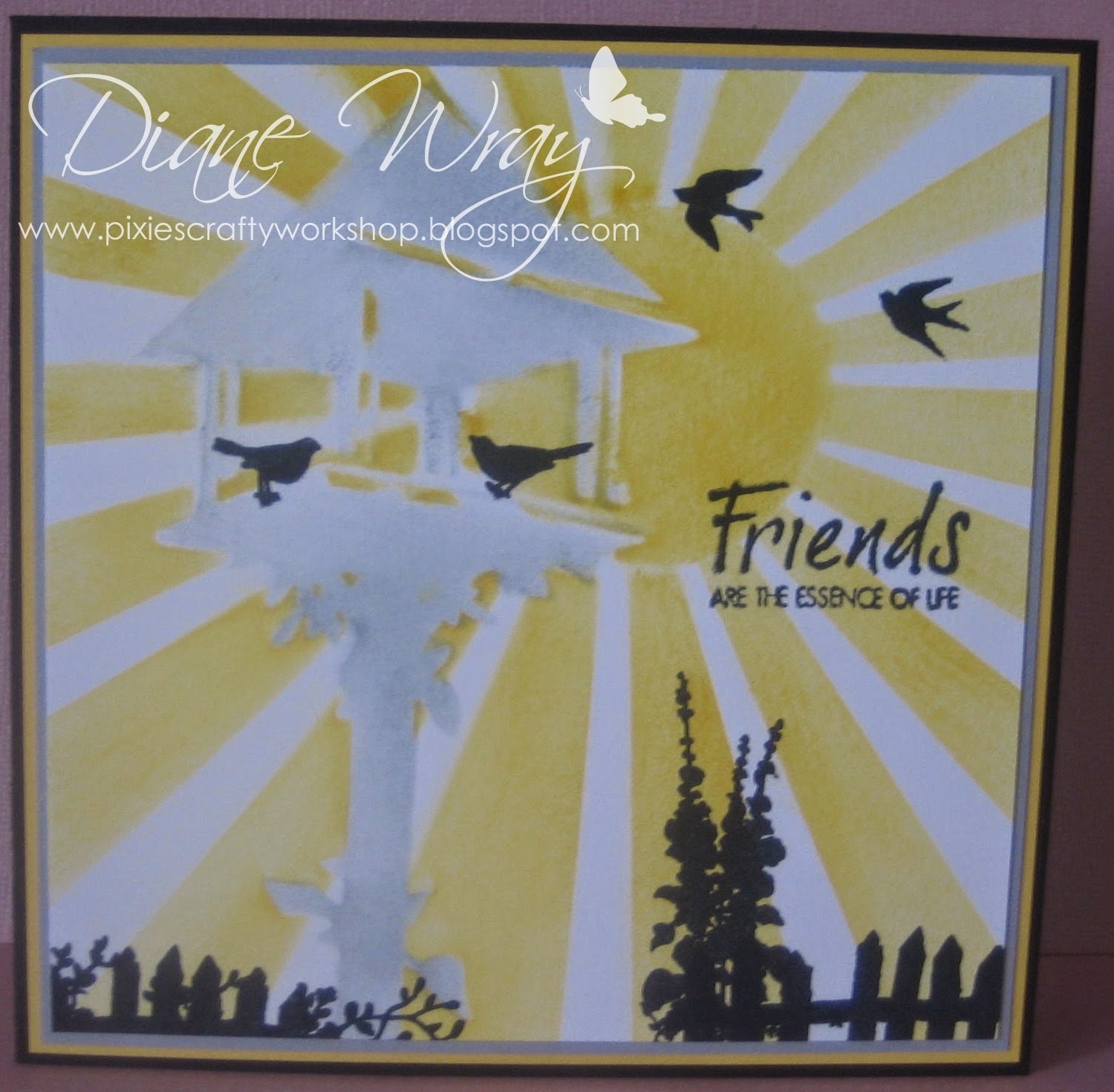 Wow that's a beautiful card Di, even though I read how you did it I'm still not sure lol. Hugs, Amanda x

Tee, hee - me neither Amanda! xx

Brilliant, love all the things you have managed to get on your card. Clever you, it looks really good.
I am sure if I tried it would be one big mixture that looked like it had been "stirred"
Have a great day

Hey Di, do we have an invisible line that connects our heads or so ? I have been playing around too yesterday not with stencils since I only have two (YET) but with layering various stamps on top of each other (that's a bit the same as with stencils no ?)
I really like your card, love the sun and the rays. I should get myself a sunray stencil aswell. I still do it by hand using a strip of cardstock. This card is so much fun, love it.
Big hug lots of love, Veerle xxxxxx

This is wonderful Di!! Such a pretty scene and the whole colour combo is delightful, love lemon and grey together xx

Great card! Love the sunburst stencil..... something else to go on my wish list I think, along with the Sparkle Medium! x

Wow Di this is creative x

Gorgeous card and a fabulous layout the black white and yellow looks stunning.

This is very pretty Di. These stencils are both great and the silhouettes finish it perfectly. Love the sentiment too. x

It's Bee-U-TEE-Ful. Love this stenciling. You are good at this! Great color choices, as it's so bright & summery. Good-o on your fantastic win schtuff too. TFS

Ahhhh very pretty Honey. There is not enough yellow around.
Hugs
xx

Wonderful. I am now officially in awe of you...
Stencils scare me...I have 2 and have never let them out to play!

I like the sun rays and your creative scene. The silhouettes against the morning sun look wonderful!

OMGee you really rocked this one Di - that is blooming gorgeous and I love everything you have used and the finished looks is gorgeous! I have texture paste, imagination crafts sparkle medium and dreamweaver paste too - I found the sparkle medium to be the easiest to use then the dreamweaver paste - I got to practice with the texture stuff! Karen x

Beautiful! Love the sunrays. I have the bird table stamp but, hanging head in shame, haven't even tried it out yet!!! Must do better. Elizabeth xx

Love the effects you've achieved. The bird table in the foreground is really effective

Hope you've rescued the laptop from the playground! I'm still having trouble with Blogger, and not just comments either grrrrr!
Hugs
Debs

Fabulous! I so admire people who can use stencils, I always manage to smear ink under the edges!!! A lovely card!