And yet another week flew by, with lots of you making cards for both Sarn's Rudolph Day and the Playground. Plus, apart from the mad week when Sarn whipped you all up to hit 100 entries, we had 70 entries this week, fabulous!!

Here's my snippets card - as you can see, I didn't use a shed load of snippets but even just one snippet qualifies of course: 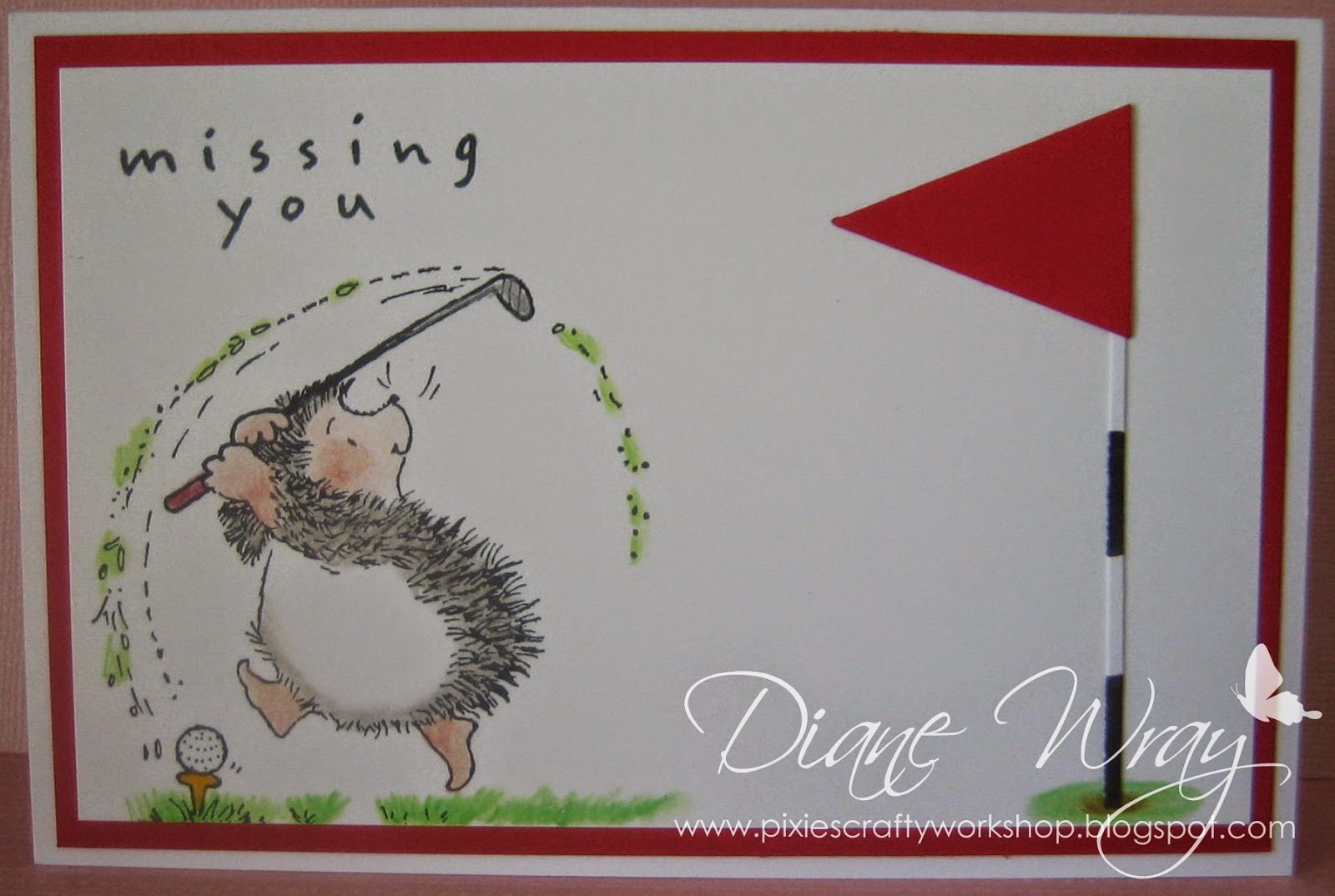 - a snippet of SU's 'Real Red' card stock for the 'frame'

- the flag pole was made with a little strip/snippet of white card, just with black bands added using a Whispers marker and the flag was punched from a little snippet of SU's 'Real Red' using SU's 'Petite Pennants Builder' punch

As always, I use my card swatch to check which SU card snippets I use from the snippets folder, that's how I know the names of the colours.

The idea for the card design came from Susan, over at 'My Little Sanctuary'.  I did email Susan asking if I could CASE it and had a very sweet 'by all means' in response :-)

Onto this weeks picks now - and they're getting more and more difficult to pick as the weeks go by. This week was trickier than ever. 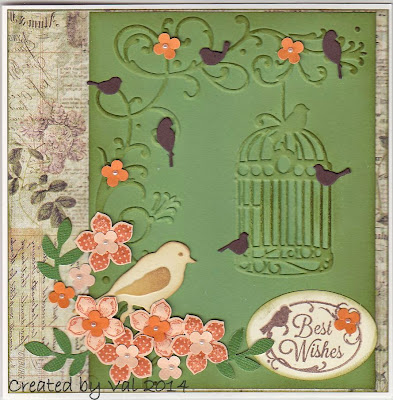 Val made this really pretty card, cleverly using an embossing folder and sentiment which came free with a recent craft magazine - I love all the extra birdies and flowers. 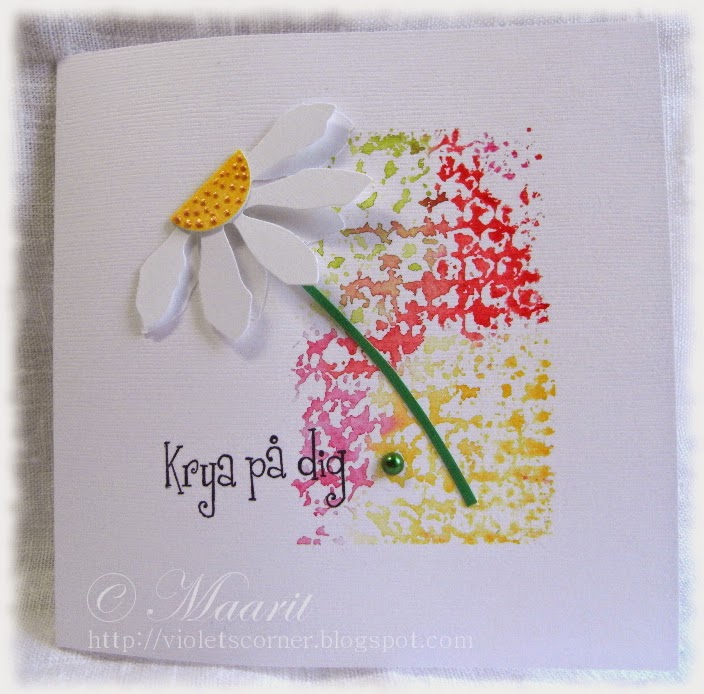 I know that lots of you really loved this card, made by Maarit. Fabulous background and the half daisy is so clever! 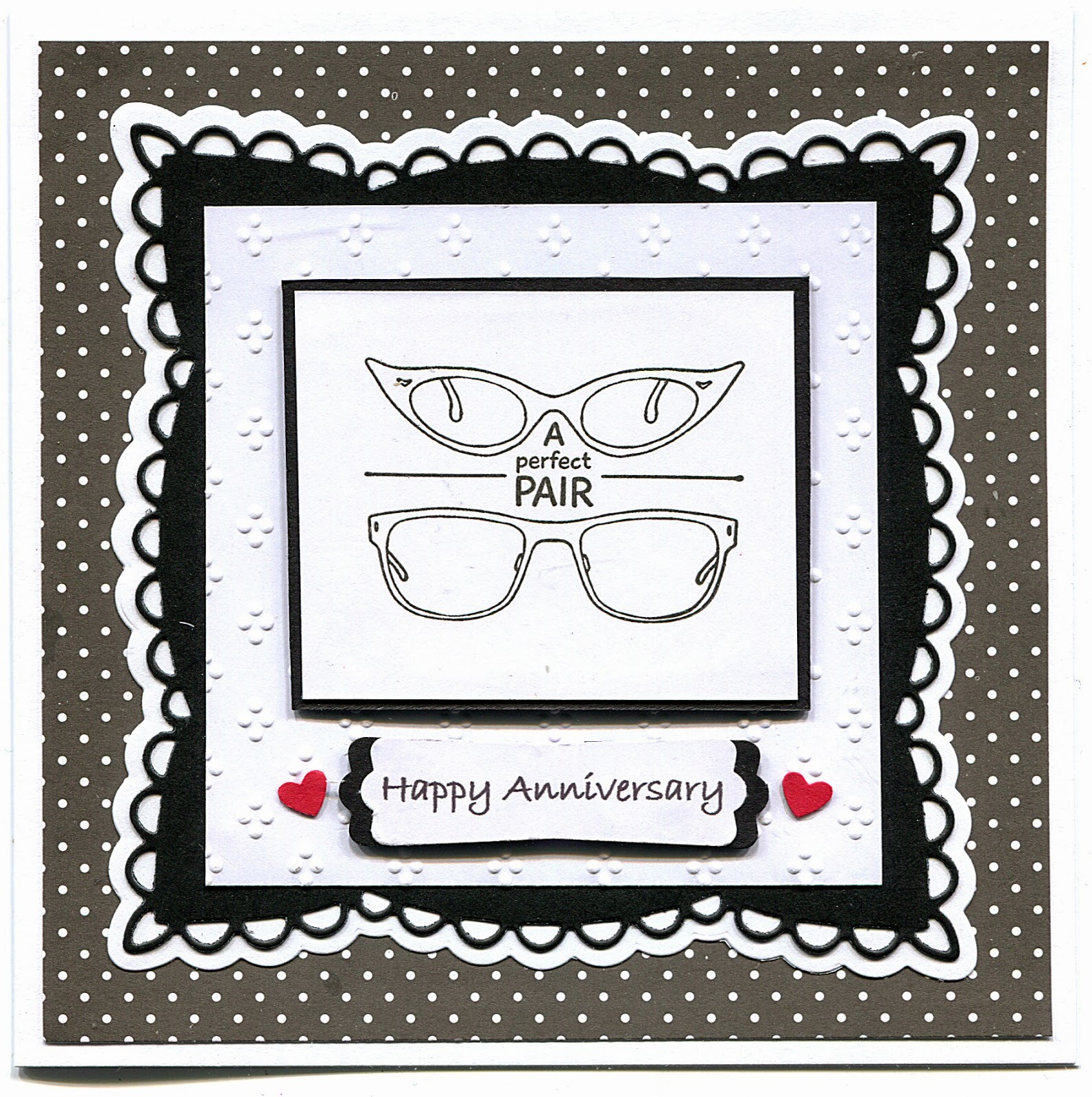 This card made by Anne really caught my eye (eek, no pun intended there!), very clever use of a great image and lots of lovely layers. Like the way the two red hearts really 'pop' too. 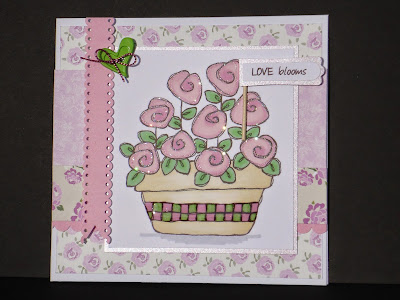 I know, it's a pink card and there are flowers so this card made by Eve really caught my eye too - I particularly love how the image and the papers go together so well, even though they're made by different companies. I think that one of the secrets when using papers with an image is to pick out what snippets/papers you want to use before embarking on colouring. 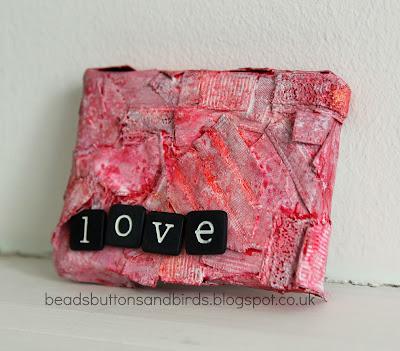 This is such clever use of little ribbon snippets, made by Laura. It's one of a set of canvases she's been working on and I love that it's so different. I admit to throwing little snippets of ribbon away here :( 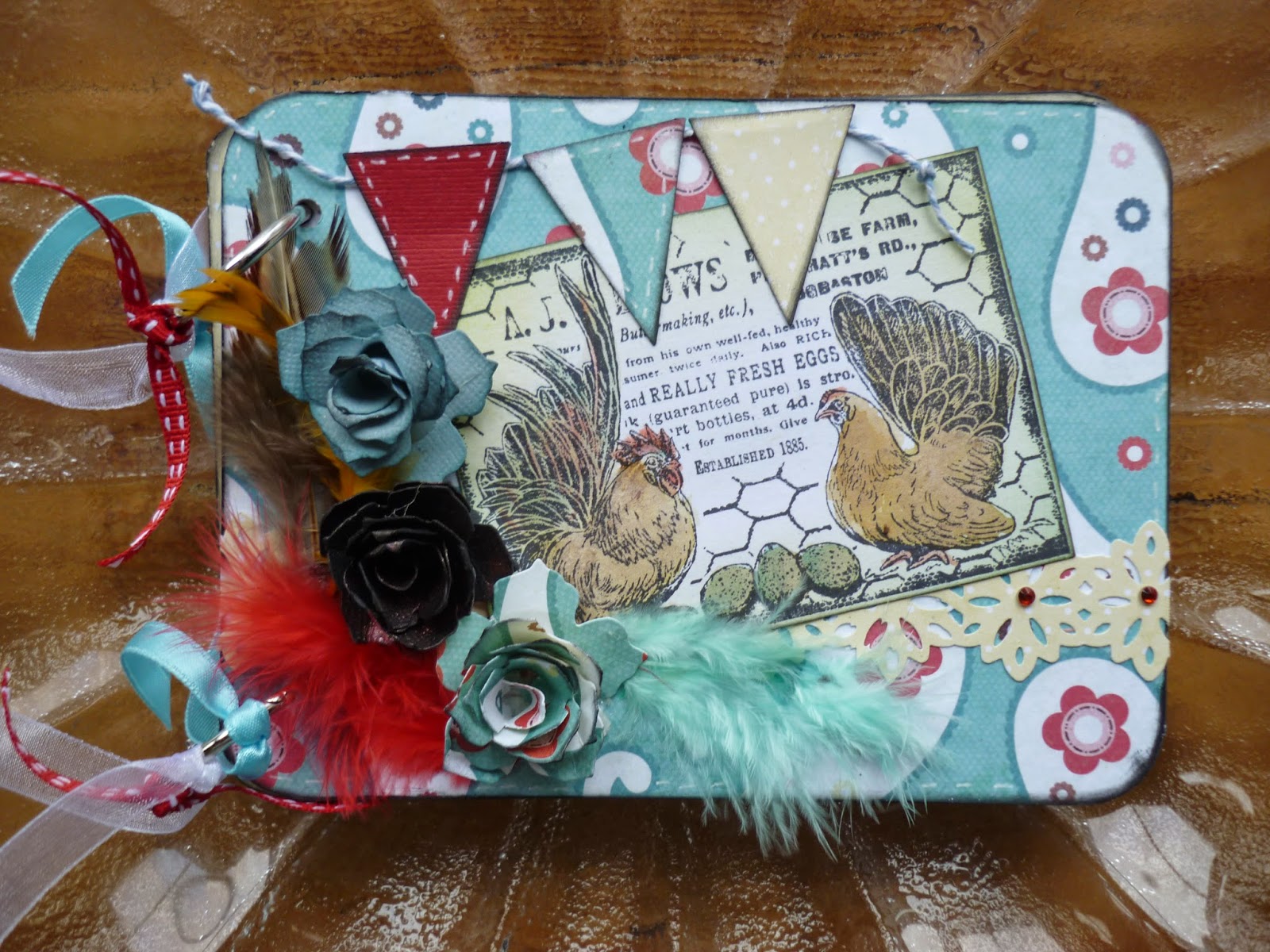 Grin, I suspect that Sam (aka Hettie) would have the vapours at the idea of throwing ribbon snippets away! This is a 'leaving' album for a work colleague and, oh my, plenty of ribbon there plus the little feathers to echo the chicken theme. A beautiful album! I was lucky enough to handle Sam's Christmas 2013 album last weekend at the WOYWW Crop and photos truly don't do them justice - every page contained little secrets, tags, opening flaps, you name it! 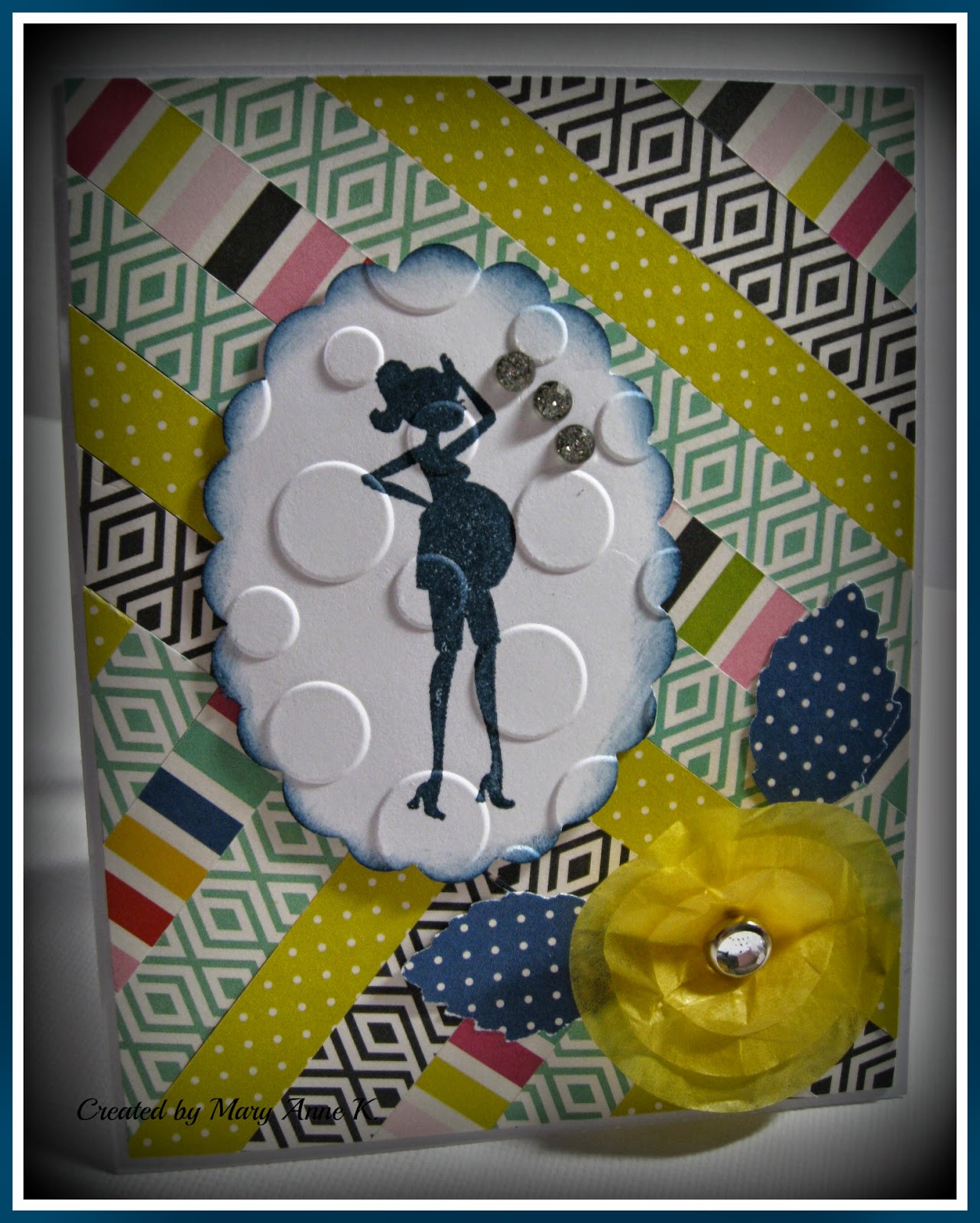 Quite apart from the great 'is that bump a baby boy or girl?' image, I love the background that Mary Anne made here - just by using up the contrasting single strips from the edges of individual sheets of designer papers.Clever!

That was a really super fast scamper through some picks, as I said earlier, every single entry was fabulous so do please check out last week's Mr Linky if you haven't already done so.

And we have one new playmate this week: 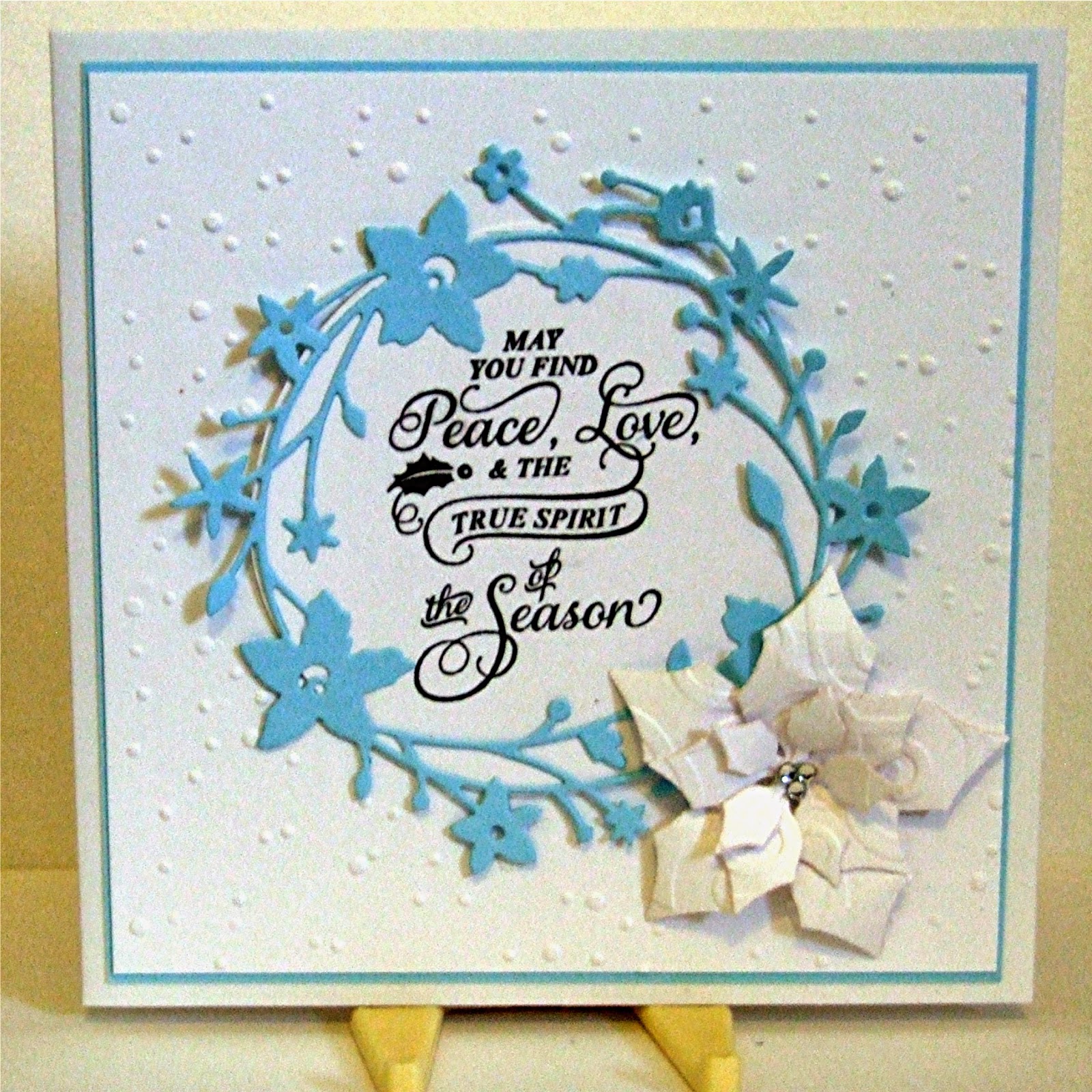 Meg came to play for the first of what I hope will be many times. And what a beautiful Christmas card this is - so fresh and clean and beautifully made.

OK, so onto the winner of last week's prize, Christmas stamp and die:

Well done Linby! It was lovely to read your comment, just now when I checked that you hadn't said a 'No thanks', saying you love the stamp but haven't got round to owning it yet - Mr Random just put that right for you, along with the ivy corner die :) I also checked back and I think your last weekly win was in week 54 back in January 2013 so you were well due for it to be your turn. Can you please let me have your address (di_wray@hotmail.com) and I'll post the goodies off to you this week.

And of course, this next week's prize is connected to my snippets card: 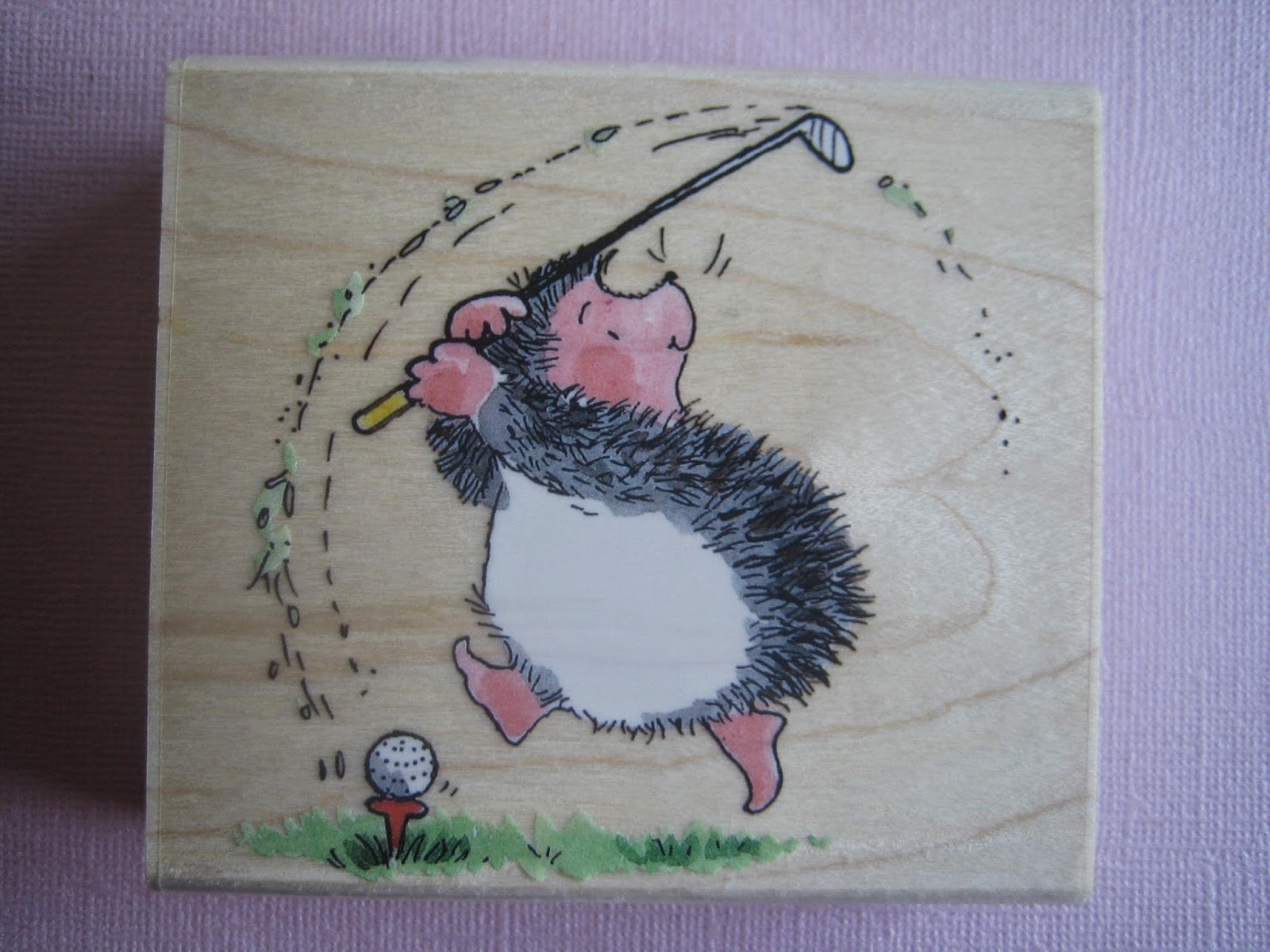 Yup, it's a stamp the same as the one I used today - Penny Black's 'Missed You!'

AND, to celebrate hitting 70 entries I'm also doing one of the 'two week' things. Most of you will already know this, but to be in with a chance of being picked by Mr Linky you have to enter a total of three times over the next two weeks. Not three per week, just a total of three over the two weeks so you can do three in one week, or split it between one and two over the two weeks. Just so long as you have a total of three entries - but of course you can still enter three times each week if you want to. DO please try to remember to add the number 3 after your name on your third entry if you want to be in the draw for the prize shown below - if you forget just leave me a comment. It makes life so much easier if I don't have to trawl right through entries counting up over the two weeks plus it makes it clear that you're playing for the extra prize - which is this beauty: 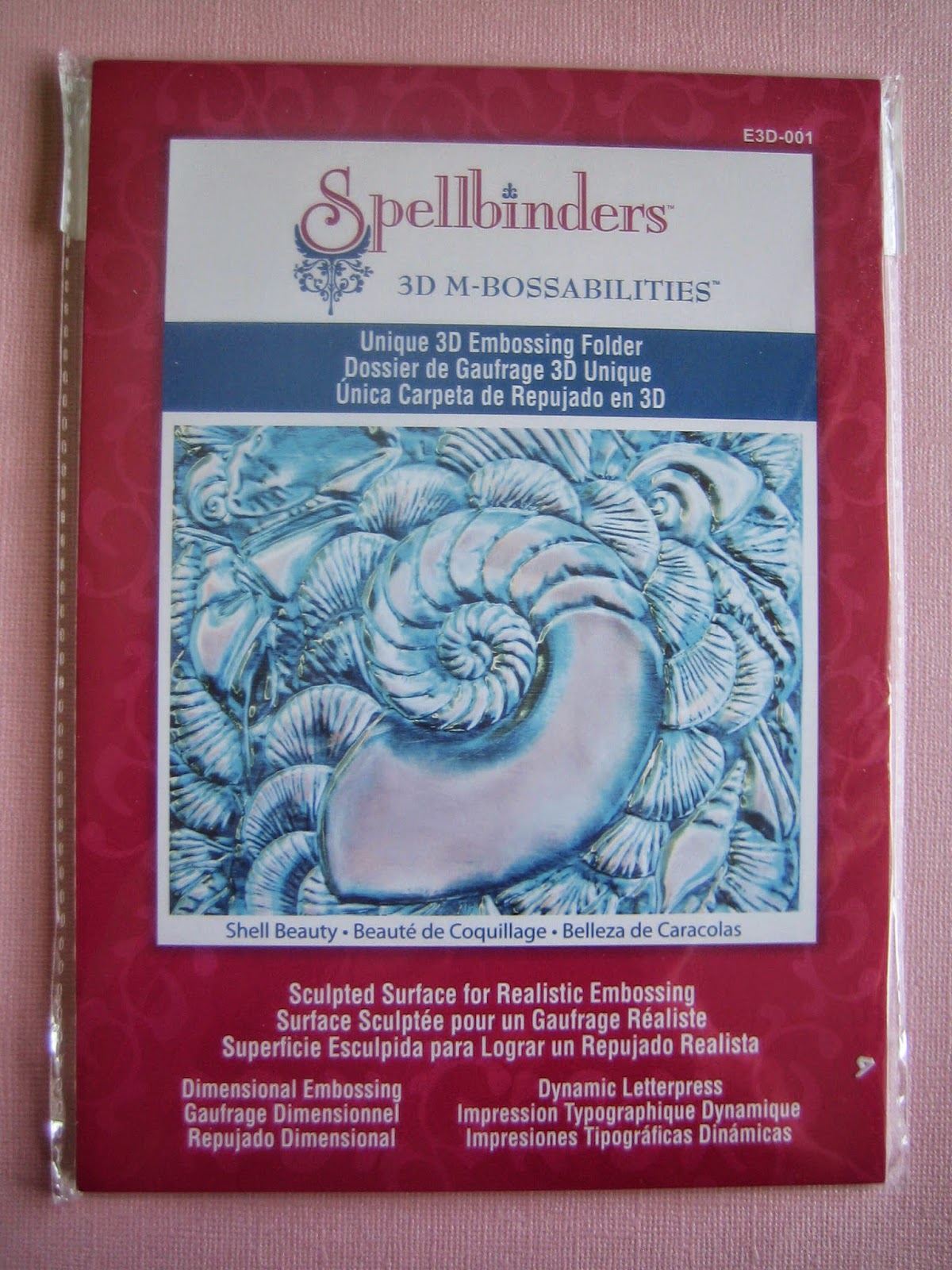 This has to be one of my very favourite embossing folders, even though I haven't used mine as yet! It's absolutely gorgeous and I think it would make a card front on its own, made by Spellbinders and called 'Shell Beauty'. It's deeply embossed and would be great to use with the brayer to ink one side before embossing. Sold? So get cracking with those snippets and I'll do the draw after 11am UK time on Saturday 14th June when I do the usual Playground stuff:)

The usual snippets challenge will run for one week (for the Penny Black stamp) and the Playground gates will close at 11am UK time on Saturday 7th June and will open again at midnight UK time on the same day. Maximum of three entries and please say 'No thank you' in a comment if you wish to still play but not be the winner of the prize.

Mr Linky is below - please let me know if you have any problems linking, I can sort it out for you quite quickly and am always happy to do so.