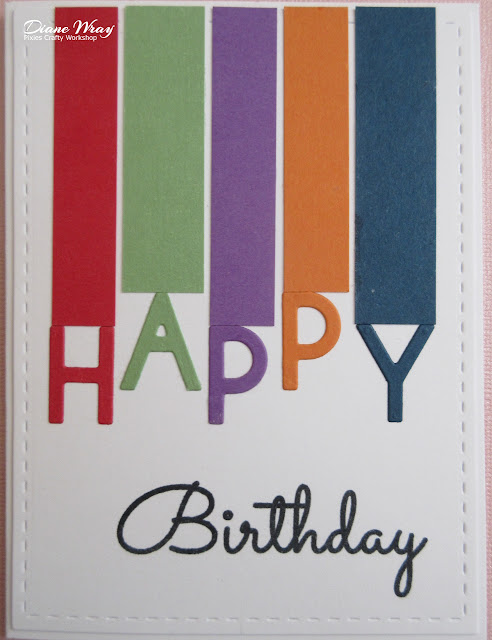 This is a great design Di, I have made it several times, and it is always popular

What a great card Di - and you could change up the colours, both letters and background, for a feminine version too!
Blessings
Maxine

A lovely bright card - a great idea which could have several variations I'm sure.

A lovely card Di and suitable for so making in so many different colours too.
Kath x

Fabulously colourful card and great use of snippets. Perfick for a young boy too. Great CASE.

Hi Di this is a wonderful birthday card I love the design. I bet the boy in question was thrilled with this card. Take care. Hugs Jackie

This is a great idea for a quick card Di and love the colours you have used for a masculine make, but equally using more pretty patterns and different softer colours, it would be a wonderful feminine make. x

Great design, Di, which could easily be adapted using different colours or patterned paper. I'm sure Josh was thrilled with it. xx

Great idea for a boy card and a fun way to use up scraps. Easy to make and perfect for a quick birthday card. We can learn a lot from our dogs. They take life one moment at a time and enjoy it.

Really fabulous card Di, perfect for a young man who's 10 - or perfect for any age or sex as it's such a super design xx

Love the bright colours for the letter banners. Great idea. You can always personalise with yrs and names. I'm finding it difficult now to make cards for my two grandsons who will be 11 and 10 both in December. Cute doesn't seem right anymore. Hugs Me.

This is soooooo cool! Such a fabulous design and gorgeous bright colours - I love it! Such a fab technique too! Hugs my friend xxxxxx

Super cute & so perfect for a boy!

Beautiful , Have a great day.