What a change in the temperature here - certainly a bit of a nip in the air and surely more people have to be thinking about Christmas by now? It's a bit hard to avoid really, given the TV adverts and supermarkets displays. Len was in a local supermarket the other morning and they were playing Christmas carols already - wonder what the staff will feel in six weeks time?!!

So, here's the thing. As the snippets challenge is only fortnightly nowadays it's made life a lot easier and this year I won't be doing the 'extra snippets card and prize per day' that I've run a few times over the festive season. I might pop something extra in but haven't decided as yet.

Needless to say, there are already a few Christmas themed prizes in the Playground toy box (bought during the year before I made this decision) and I propose to start offering those in the challenges running up to Christmas. Just to get you in the mood :)

So, here's my Christmas snippets make for this fortnight - and what a time I had taking the photo. That blue mirri card literally does act like a mirror to the extent you could see loads of detail - including the whites of my eyes at one point! In the end the best I could do, whilst almost swinging by my toes from the ceiling light fitting in the craft room, still has dark shadow behind the die cut, sigh. Trust me, it's all a lovely rich shiny blue with no dark areas at all in real life: 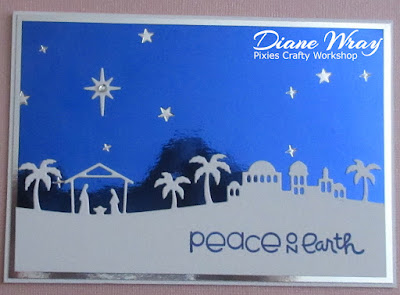 - snippet of glossy dark blue mirri card with little silver stars dotted here and there (wish I could remember where I got this as it's such a lovely design), trimmed smaller than the silver mirri layer and set aside  (NB, do not glue to card front yet)

- then stamped the sentiment, using Memento 'Mediterranean Blue' Brilliance ink and a stamp from the Paper Smooches 'Christmas Sampler' set onto the white strip of card. I fathomed out it needed to be done at this stage for easier alignment in the Misti :)

- made sure the sentiment stamping was fully dry and added Stick-It to the back of the white card strip before die cutting the Nativity scene,  using the really lovely Sugar Peas Designs 'Nativity-Scape' die

- they really thought this die through and above the cutting for the scene itself, a Star of Bethlehem is also included - so it cuts in one pass. Plus, despite the intricate design, it cuts like a hot knife through butter

- once the scene was die cut, forethought made sure it didn't need any further trimming at the bottom edge, it was lined up with the ready trimmed piece of dark blue starry card and gently pressed into place

- added the Star of Bethlehem and then popped one small, clear crystal, sparkly gem in the centre - finished! And, it still goes as normal letter rate too.

I really enjoyed making this card but the secret is to plan each step ahead a bit like an engineering project. Also measure very carefully to get the right balance between the sentiment, the scene and the sky before you begin to even think about die cutting the Nativity-Scape itself. One tip is to be prepared to use tweezers to remove any little scraps of backing paper if you do decide to use Stick-It self adhesive sheet - those little palm trees have the narrowest trunk and in every case the backing paper tore at that point. But gosh, what a stunning die!

Also, although I went for a night sky, I've seen some fabulous makes on line where the backing was coloured with Distress inks like a vivid evening sky and the die was then cut from black card. Lots of potential and genuinely one of the most beautiful Nativity scenes I've ever come across.

Which, of course, leads us into this fortnight's prize: 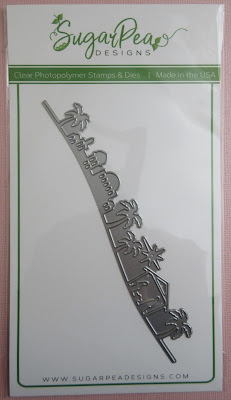 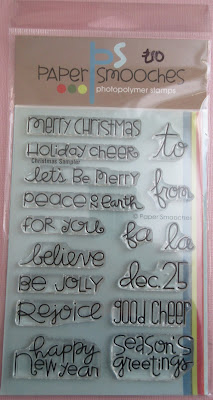 Yup, it's a Sugar Peas 'Nativity-Scape' die and (once again, even though we've had this as a prize previously, 'cos it's such a lovely set) the Paper Smooches 'Christmas Sampler' set of sentiment stamps.

As always, the Snippets Challenge will run for two weeks and the Playground gates will close at 11am UK time on Saturday 25th November. The gates will open again at midnight UK time on the same day.

It's a maximum of ONE entry and please say in a comment if you wish to play and be a possible winner of the prize. As I already said, the prize is as above and I will happily split the die and the stamps set, in which case I'd do further draws for the other item. Please also link back to the Playground in your blog post to be eligible for the draw.

Speaking of Mr Linky, he seems to have slammed the Playground gates at 10am rather than 11am yesterday - I think it's to do with the clocks changing after I'd set the link widget up. Sorry if you got caught out.

Be sure to call back next week to see the winner of last fortnight's prize which is two 6" x 6" Studio Calico 'Snippets' paper pads along with two Woodware 'Numbers' stamp sets, another lovely Guest Designer and my picks from the past two weeks.