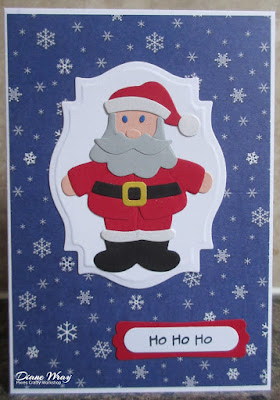 I will meet you behind the potting shed for a quick tipple cos I have been cutting the rest of the elves out at 23 pieces per elf. Strewrh how I hate those little Elves. These are defo the last ones I'm ever, ever gonna make. Right you bring the glasses and I have the wine in the cooler. See you in 5. Hugs Me.

I think I would have given up!!! Well done you!

I'll be there - look out for a crazy woman waving glasses and wearing pink PJs! Oh, did you mean drinking glasses? Thought it was specs - make that 10 minutes instead - need to run back home first! :)

Fabulous card, Di. I bought this die recently. It arrived this week and I was planning to do some batch making this weekend using it. However, after reading your experience, I might have to think again!! 🤔 On second thoughts, I could always join you and Mrs A behind the potting shed for a quick tipple if I'm tearing my hair out assembling all the little Santas. xx

Psst, off to bed now but I do have a Santa die set going velly cheap! xx :)

One tip Liz - the photo on the web is the wrong way round! His hat has the bobble on the left in the photo whereas it's actually on the right when you make the flipping thing up! Took me ages to fathom out that they'd flipped the phot around the wrong way! Other little tips are to pop his head just touching top of his jacket, everything sort of fits from there. I worked from the boots upwards - am still recovering here! Di x

We'll have a glass of summick strong waiting for you BTW - you'll need it! x

That's a good idea to start at the bottom and work to the top. He is brilliant by the way but I think I will pass on the offer . lol. Email coming but had a major malfunction with my camera last night. It basically went into melt down and really did loose the plot. All its settings everything. Panic didn'tcome close. Hugs me.

Super duper cute, but oh my goodness you have way more patience than me!

Don't you sometimes wish you could stack several layers of card and cut them all at once? That's one (possibly the only) advantage that old red Sizzix machine used to have before today's all singing all dancing machines came along! However this cute little chap was well worth all the cranking! Your card is adorable
Jane

Adorable card! Sounds exhausting to make though! At least you have six - maybe next year you will get the urge to use the die set again? 'No' did you say? Tee hee! Hugs xxxxxxxxx

That really is a lovely Santa but I can imagine just how long it took and maybe how many times during the process you thought 'why am I doing this'. The end result is brilliant and as you did six in all I reckon you won't be playing with that die set for a day or two. Full marks for perseverance.

Hmmmm........I wonder if I can cut two or three layers at a time with this die? Thanks for the idea, Jane. xx

So worth all of your effort though Di, this is a fantastic card he looks great.

I love your little Santa's. That kind of die can be quite fun, but also a bit tedious. At least you made six of them. If you had started off with just one, the others might never have been made! Kate xx

Well you got a great result despite nearly losing the plot! Your patience has been rewarded.

Best put that die at the back of the drawer until you've forgotten just how much of a pain it is!

Hi Di this is a stunning card but it did sound like lots of work. At least that is six more cards made. Take care. Hugs Jackie

So this really is a snippets Santa and it's cute!!
Lia xx

Patience of a lamb you are Di this is gorgeous XX

This is an adorable Santa but I am so impressed that you did that die cutting over and over. Bravo to you. The card is fantastic and you can admire it while applying a soothing balm to your arm!

Your Santa does look fab, but I know my limit, and it's way below 17 tiny bits for one Santa.

Him's really so cute with his 17 bits and his dyed facial hair, Di! You did a great job and you do get the Percy Verance Award for this year!! Hugs, Darnell

He's a super Santa but at 17 pieces I don't think I'd have finished one let alone all six. Enjoy your well deserved tipple xx

Card and Santa are adorable. Well done! But - why behind the shed? I'd have something right on my crafting table! :)

Oh my gosh, Di. You do have a lot of patience! That was a lot of work and i can certainly understand the frustration level.
It sounds very much like that trailer card i made my daughter. I was going to make 5 or 6 extra and donate them to a fundraiser sale held yearly at our old RV Resort. After making one, I nixed that idea...those zillion wee pieces would have put me over the edge.

Your card is so darn cute. he really is a very cute Santa! I like the idea of the dots for the eyes as I agree about the difficulty of drawing them in. I redid my wee snowman on the trailer card and used cut out dots for the eyes and buttons.

Also like your colours and had a chuckle about the Grecian formula...my
father-in-law used to use it!!

A fabulous Santa and a great test of your patience too!
Kath x

fantastic Santa and card well worth all the work, thanks for your kind words and best wishes Megxx

Supercute Santa!!! A lot of patience, but such lovely work!

Finally, thought you had years ago, kidding.
Super card and a fab die, maybe not to use but to see the finished product. Great papers too.

I think he's awfully cute. Santa can be naughty too apparently. Hah! [Bunny]

Hmmm - sounds like my teapot card the other day - make that a strong tipple, then you may be interested in using the die again 'cos you will remember the tipple and not why you needed it! Thanks for the giggle
Blessings
Maxine

oh Di - I feel your pain in more ways than one! I had a recurring problem with my arm for several years, the chiropractor was adamant it wasn't the die cutting machine, but not sure she really understands what I describe. Got the gemini - no more problems with my arm!!! To your card, well it was worth the effort, he's fab and I agree about the beard, but can imagine putting it together was trying!.

Wow, you definitely deserve a large glass of mulled wine or other strong drink after all that die cutting! He looks fab though x

All your hard work and patience is worth it, he's cute!
Hugs,
Em xoxo