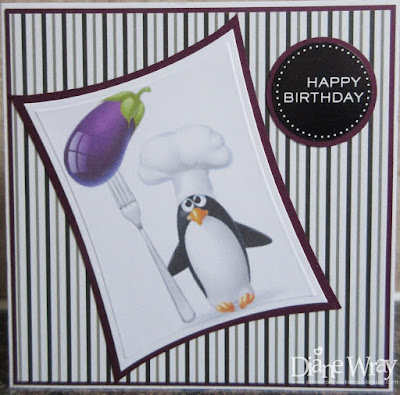 How cute is this image! Super card and it sounds like it was perfect for Edward. xx

What a cute image, and so perfect for the occasion! I don't think I've ever seen a penguin chef sporting an eggplant on fork before, but I love it :)

How cute! Di, he's going to love it. That's wonderful about the restaurant job too. He'll be wanting to cook up something with eggplant now!
Lynn

What a fabulous, and appropriate, card for your nephew Di! Just out of college I lived in London for a year and worked as a silver service waitress and the kitchens were very much "yes chef". Very different than here in Minnesota. Thanks for the happy memory:)

A great card and image too - perfect for a teenager birthday.
Kath x

Clip art has come to my rescue before now, too... but boy does it take an age looking for an image!
Perfectly styled card, Di. I'm sure Edward loved it. X

I'd say this card is just right for a teenager who is into cooking - bet he loved it. Thanks for the link to the clip art, another way to while away some time!!

What a great card for a trainee chef. I hope he does well. Love those wonky rectangular dies.

I hope your back is getting better.Hugs, Barbxx

Great image and the background complements it perfectly.

Yep . . . always good to have a few blog posts in reserve! Such an amusing image and I'm sure it went down well with Edward. LOVE the wonky rectangles die and the stripy paper - perfect for a masculine card.
Hugs, Sarn xxxx TOOT TOOOOOOOOT on my whistle!

A perfect card. I never think to look on clip art, but I will now! Hope your back is improving. Cara x

Hope you are feeling better!!! This card is so fun....I love the shape of the panel...did I read it right that you cut that out? I thought it was a die! Awesome card!

What a great Clipart image Di and the striped background is just perfect. I'm sure Edward will have loved this. x

Fabulous fun image, perfect for the occasion. I love the stripe backing paper and the wonky rectangle.
Jean x

Brilliant image Di and it works perfectly with the striped paper. I do hope your back is improving xx

Congrats to Edward for his work and this card is very appropriate for his birthday, I think! Very fun and elegant at the some time! The stips on the back look fabulous with this cute chef :)

Gosh I haven't looked at Clipart for ages, tend to forget about it these, must rectify that. Super image and perfect for the young chap. Great idea with the paper and the aubergine add just that lovely tad of colour.

What a silly/fun card but oh, so appropriate!

That's a fabulous image Di and perfect for a male budding chef too. It's funny I was trying to find a certain image a couple of weeks ago and came across Clip Art and it's really improved a lot. Rest and relaxation is order miss Karen xx

I die cut the image itself but then, to have a narrow border of plain card behind, I often draw around the outside of the die and then fussy cut it by hand as a backing mat/layer. It makes for a narrower border than going one step up in the die set and often looks a lot less obtrusive :)

Such a great image and perfect for Edward. Congrats to him on his new job! xx