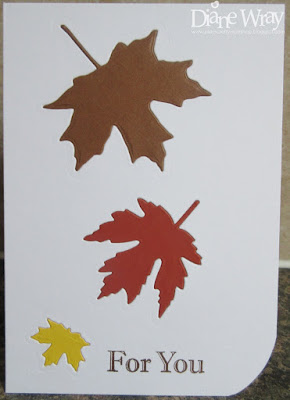 Hello Di!! Your card looks like the leaves on the mountains here in beautiful New Mexico.

I continue to improve and get stronger. I still get tired easily though. Hopefully time will change this.

Hugs to you and Len
Kay

Gorgeous CAS card, I love the simplicity of the design. Thanks for the reminder that inlaid die cuts are allowed over on the LIM challenge. :-) xx

Wonderful one layer autumnal card there Di. LOVE the font on the sentiment too.

This is such a pretty CAS card Di and perfect for the LIM challenge and I love the colours of the die cut inlaid leaves and the srntiment finishes it beautifully too. x

This turned out so pretty, and I just love the inlaid look of any die cuts! The single rounded corner is a refreshing accent too! Well done!

Pretty card...brilliant idea...the colours are super this time of year.

Love the technique you have explaned, fab way to make a one layer card with diecuts! :D Clever idea! Love the inlay border around the leaves!

Hi Di, a very lovely card. Pretty colours of leaves and I like the rounded corner. Barbxx

A great interpretation of the LIM theme - very seasonal too.

Clever clogs! This is brilliant. hugs Mrs A.

Fabulous card, Di. Love that technique and have to agree with Mrs A & Viv - brilliant :) Hugs, Elizabeth xx

I love those colours, Di, and how crisp your unlaid leaves are.
Thanks for sharing with us.
Anita x
Less is More

Striking, fun and fabulous Di. Love that you've used those inlaid dies and it works brilliantly with a leaf design. thanks so much for sharing and taking part.
Sarah xx
Less is More

Love this card! Your inlaid dies are beautiful.

Sorry for being so late in commenting, I don't know where last week went to!
This is superb DI, i love your design. Thanks also for remembering our ruling!
Brilliant!
Chrissie
"Less is More"

I'm catching up on my commenting after my hols, sorry to be so late!
Di this is stunning, great use of your dies.
Thank you for joining us
Anne
"Less is More"