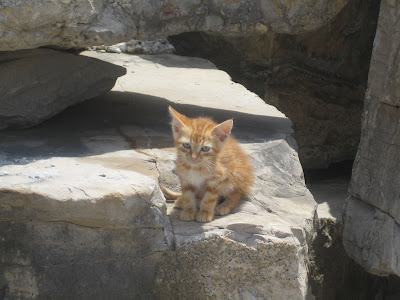 Awwww, what an adorable kitten. Can't wait to see your new boat! Congrats on your win....your having a good week!

Hi Di - we used to worry about the gorgeous kittens we saw in Greece - never tempted to bring one home though. Send me a pic of your suggested project and I will say if I think I can do it. x Jo

Such an adorable kitten, sad situation. Happens to often the world over. Hope your Euros will help it.
On a happier note: Happy to hear you are enjoying yourself, nothing like a sleep in. Congrats on your win.
Hugs
Bernie

Yes, you can put him/her in your suitcase and I'll definitely have another pampered puss Di!!!!! You knwo me only too well. Congrats on your win, tried to comment yesterday but it wouldn't allow me.....boo hoo...!!! Enjoy the sun!

Hi Twiglet, when we get a sunny day at home I'll take a piccie and get in touch! Di x

Ahhh Di he is sooo cute. When we go abroad we always end up feeding the cats.
Diane :-) xx