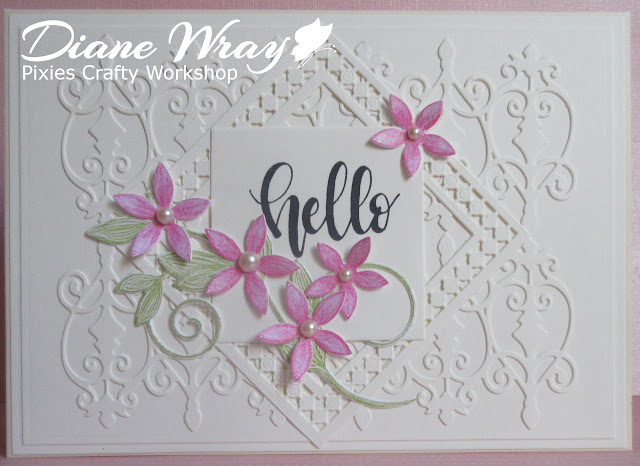 Gorgeous background design paired with the pretty florals, they are beautifully coloured!

Very pretty Di and love the simpe 'hello' sentiment, and the pearls really finish the flowers so perfectly. x

This is so very pretty, Di. I had not heard of this charity kit before. I will look it up!

A lovely card Di and thanks for the link to my blog too! I love this kit and am waiting to see what the June one will be.

Oh that is lovely! I must start getting Christine's kits again. I used to get them every month, then she stopped making them for a while when her Mum was ill, and since they started up again I've dithered every month until they've been sold out.

I thought 'clematis' when I saw this card - so pretty. I must keep a watch out for the next kit - far too late for this one. What will Dudley think if he has to share his garden with foxes I wonder - watch this space indeed.

A fantastic card Di, this looks like it was a gorgeous kit.

Gorgeous card Di - love the elegance of the tone on tone die cuts, with just the touch of colour on the flowers and leaves.
Stay safe
Blessings
Maxine

This is a beautiful and delicate card. Simply lovely.

This is absolutely beautiful. [Bunny]

Hi Di your card is gorgeous. It is just so pretty. I love it. Take care. Hugs Jackie

Such a lovely card Di! xx

What a stunner this is Di. So pretty and feminine. Well done for finding the exact pearls you needed to go with the project - it's those things that I find so satisfying when crafting. Wouldn't it be amazing if a fox family were to move in - although I came across someone else in Blogland who was having trouble with a family of foxes at the bottom of her garden because the fox cubs were naughty and distructive! Just like puppies if they're not watched I suppose. Take care, Vicky xx

Oh wow! White on white with a pop of color is beautiful!

Such a pretty card, Di!

I too think your card is beautiful, Di. Super well done. Hi to you and Dudley. Pictures always welcome. Hint.

Beautiful, the pink really pops against all the white. I shall be hoping to get the next one too - ive got 3 hedgehogs at the moment. Hugs Emmax

A lovely card never heard of these kits will have to learn about them. Yep I took roughly 2 years away from paper crafting to concentrate on jewellery. Now I'm back hopefully it will be a balance of the 2. Foxes how wonderful it will be if they set up home but I think it might be a bit late in the year now. Maybe next :-)

Such a beautiful card Di. I love the wonderful soft colouring of the flowers and the background dies are fabulous. It's a really super kit xx