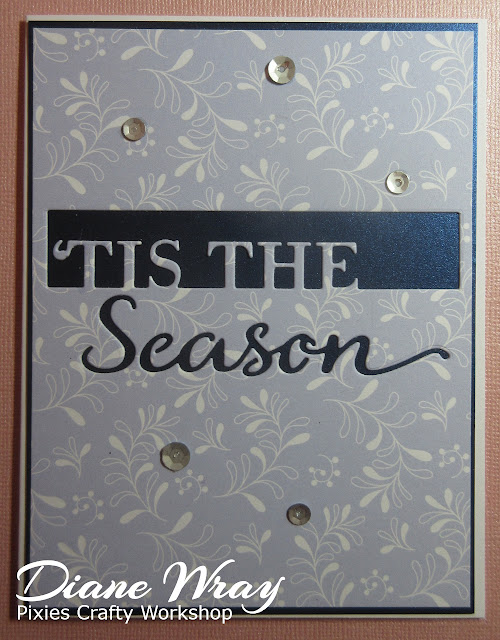 - snippet of a much loved design in pale blue by Kanban called 'Merry Mistletoe'. I bought a good few sheets of this card some years ago, absolutely love it and squirrel away every last scrap

- then glued it onto the dark blue card layer, using a mixture of Collall All Purpose glue for the bigger areas of card and little dots of Zig glue for the more detailed areas

- glued the finished panel onto the card front

This was a really fast card to make so I made two at the same time. The added platinum sequins really made this card feel 'finished' without the sparkle of bright silver.

I LOVE this die, which is from a range of three Christmas themed ones, even more since I made this card. The die practically does all the work for you so it's ideal for 'batch baking'. I took the even easier route as I was racing to make this just yesterday and followed one of the designs on the reverse side of the die packet. These are the designs shown, and apart from the one I followed, I think you'll agree the other two shown are quite similar to the Memory Box 'Grand Merry Christmas' die that we all went crazy over back in 2014 or so, you would just need to trim away one or other side of the bottom edge of the cutaway part. But it's even more versatile in that you can also use the same design as I did with part of the sentiment in a cut out box area - nice:

The image came from the internet Hero Arts website and if I increase the size it's blurred - but it's enough to show what I mean! It's on the back of the packet the die comes in as I already said - it would have been quicker to take a photo of the back of the packet than explain why the image is small, blah, blah - but the light isn't good right now. .

And of course today's prize just has to be this: 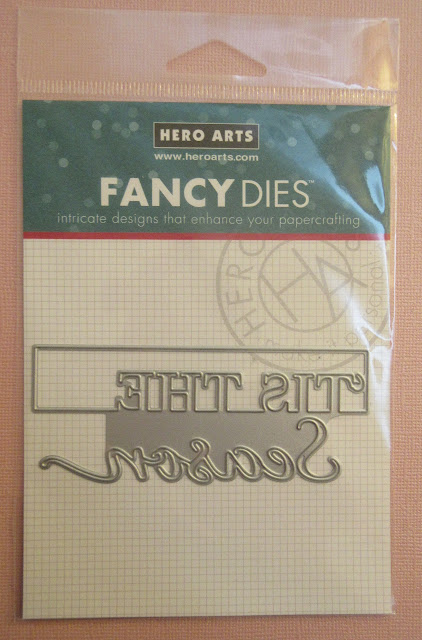 It's the Hero Arts 'Cut Out Season Fancy Die' the same as I used today and the die is 3.75" wide, measuring across the rectangular box cut away section.  Of course, I bought three (plus my own one of course) as prizes so you have three chances to win this lovely die!

We've had snow here today! It fell this morning and looked to be quite big and fluffy flakes at one point - but as I'm typing this in the evening it has melted, although there may be more to come. For us in the South part of the UK it's not a very frequent event and the silence still reminds me of my childhood spent elsewhere. It was quite funny as Dudley hasn't seen snow since he was a puppy and Len had to encourage him into the back garden. He (Dudley!) trod very gingerly, squatted to do a wee and then followed up with the rest of his 'performance' as if to say 'Dad, I don't need a walkies today - I'm all done - can I come inside and snuggle up again please?' And then he scampered right back into the warmth for treats and cuddles. And yup, at two and a half coming up - Dudley still squats to 'spend a penny'. It's very endearing and long may it continue.

Speaking of our beloved pets, I wept yesterday when I read a comment from our lovely Playmate Lynne in NI (Northern Ireland) where she wrote that their darling wee Westie called Ruby had gone to the Rainbow Bridge just before Christmas. Ruby was one of the driving forces behind my longing to have a dog, her dear little face, dark eyes and button nose smiled up at me when we went to choose Dudley to be honest and I actually feel as if that sweet little girl took a piece of my own heart with her as well. Sending you our love and hugs Lynne, from everyone in the Playground too.

I think it might be a nice idea if we have a 'Ruby's Snippets prize' on offer now and then - I often have a few pieces in the Toy Box which I can't make a sample with as I only have one of them. Wouldn't it be lovely if 'Ruby's Prize' happens every so often - as she truly still is a very special and much loved family member. I wouldn't make a card but would make it Ruby's own challenge by using her photo as our inspiration. Help, I didn't ask Lynne about this but am sure she will be content. And then whatever prize we wish to offer further down the blog post. So, if you do wish to send something for 'Ruby's Snippets Prize' then feel free to get in touch. Brand new, unopened and the sort of thing we'd love to play for please.