Today is all about you

I did a quick scrabble around some snippets and toppers lying on my desk - and made this card in double quick time: 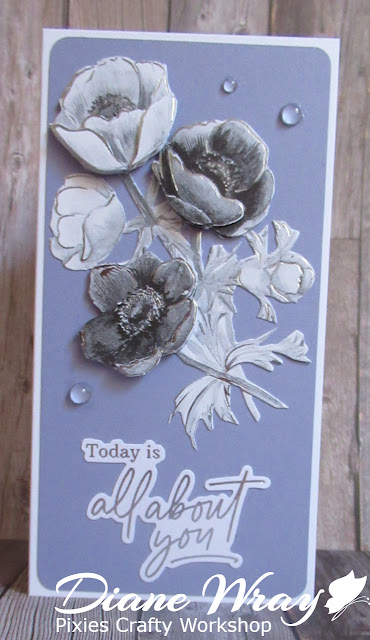 - mini slimline card, made from a large snippet of white card

- the floral topper was made up by yours truly ages ago and fairly recently rediscovered in a cello bag ...........hiding in a box of 'bits and bobs' - added using a chunky glue pen

- the sentiment is from a NBUS purchase of a Pinkfresh Studio packet of foiled sentiments - again, added using a chunky glue pen

- finishing touch - three 'raindrop' gems by 'Lucy's Little Things. I used Glossy Accents to adhere them - that stuff is SO unforgiving if it squidges at all, normal, but strong, glue for me in future!

The floral topper was part of a sheet of pop out die cuts ready just to layer up - possibly made by Kan Ban - but I can't be sure.

The set of sentiments is a mix of gold and silver sentiments on white backgrounds. Half gold script and half are silver script. Many are on die cut shapes, like the one I used for my card, and that's mainly why I bought the packet (for speed and ease) - although, others are on rectangles with foiled frames. I have to say that the wording on many of them isn't terribly inspiring to be honest (almost too 'funky', save your pennies!).

I'd like to enter this into Darnell's NBUS Challenge #42 HERE. The sentiments were having a first outing.

AND, the Results of Challenge #436 are now over in the Snippets Playground.

Dudley Pupdate: Dudley, like most dogs, sometimes dreams when he's asleep. Usually a whimper or two and his little legs do a quick workout. But a couple of times he's really shaken us with a single, really forlorn and heartrending, howl whilst asleep. The first time it happened, months ago, we sprang out of bed convinced something terrible had happened. The other evening we were watching a TV programme about a 'lone wolf' and its plaintive howl was exactly the same as Dudley's. Sure tugs at the heartstrings - and reminds one that of course dogs are descended from wolves. Certainly, when Dudley dives into his evening meal I can totally relate to that one! He's fussy about what he eats so it took us a while to figure that out when he was a puppy but he's like a little vacuum cleaner now. And of course, he can hear the rustle of a cheese wrapper from the other end of the house!