I'm still plodding on, making up the batch of die cuts (I cut them a while ago) into up cycled Christmas cards. I find that when other things become too hot or whatever, it's good therapy not to start off totally afresh. Just take what might have been thrown out with the garbage - and up cycle it, ready to 'ride out again'. The other day I fished out (already culled and popped away) a bunch of shop bought cards fronts saved from previous Christmases - and found plenty more to be going on with after i use the ones already die cut from 2021............. including five or so robin images! What is it with friends and family sending us robin cards?

Anyhow, today's snippets card (just one snippet of silver mirri card used for two card elements I confess) was in the original batch of dies cuts I've been using lately - and this is the result: 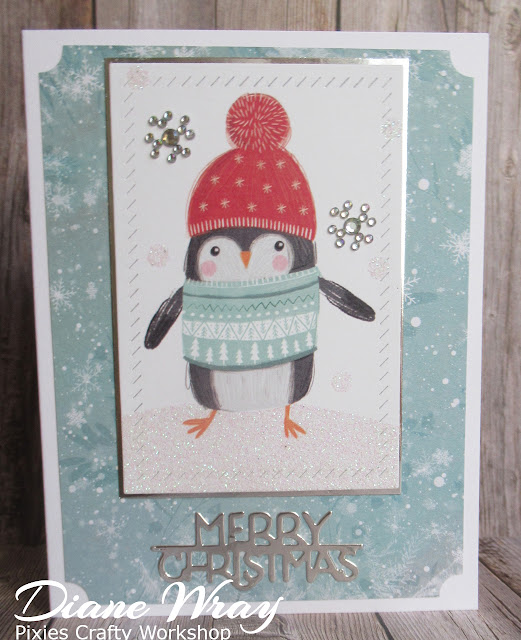 - mounted the penguin panel onto a narrow background border of silver mirri card and set him to one side 'for later' - as our beloved Queen said about her marmalade sandwich!

- then used the rest of the silver mirri card snippet to die cut the greeting using - once again my current favourite - Tonic Studios 'Mini Moments Merry Christmas' die, only one layer this time

- in the end I found some small snowflake self-adhesive gems in a very neglected box of Christmas embellishments, so I added two of those and it really did lift the image panel!

And, I did push the snowflake pieces closer to the centres once I saw the photo enlarged above. It's a sweet idea to use different sizes of gems to make up a little embellishment but sometimes the manufacturing accuracy is a little 'off'. So there we have it, one more Christmas card to add to the box for 2022. Photo looks a bit blurred to me, but it was the best of the bunch!

Now, most importantly, do please hop over to the Snippets Playground HERE, where Sarn has kicked off a fresh challenge. Numbers were much lower than usual for the challenge which just closed, but the weather was hot, it's Summer Break time for many etc. etc. so we 'roll with the punches' as they say. Many thanks to those of you who did play along - much appreciated.

Dudley pup date. Hmm, a mixed week with him as he had total 'HH - ie. Havanese Hysterics' when he was in my car to do the 'drop Len's car for service' - bring him home and then do it in reverse about five hours later. Of course he (Dudley!) did the screaming hyena act almost all the time.We've said it's potentially due to us not taking him out for a drive very often - for that read that 'we usually go out singly and leave him at home with the other one of us'. He's only been left 'Home Alone' once and we watched him via CCTV most of the evening!

We hope that before the Summer is over we'll make the effort to take Dudley out with us for a mid-week pub lunch - with a drive thrown in - to show him that drives can be for fun reasons and not just 'business stuff', the vet or grooming.

I have a lovely place in mind, in a local village with typical Hampshire thatched roofs, and the pub, which is a converted watermill, welcomes dogs. Yay! On a nice day we could sit outside and also show Dudley the river which flows past the lawns as well as the lake with the ducks and swans. It's a huge sadness sad that the pandemic, which broke when he was still a pup, and our own caution, have curtailed such opportunities. Let's see if we can broaden his horizons - as well as our own! I noticed that Len was happy to not wear a mask when he was at the car dealer's, and he's been to a local supermarket a couple of times now (spending soon to be obsolete old £20 notes) and has done the same. For those of you currently throwing caution to the wind - I envy you, although we're a bit slow catching up!