Good job I set out really early out to make my entry for ScrappyMo's Rudolph Days Challenge for June - HERE.

I got SO VERY over-ambitious and went for a 'batch bake' of eight almost identical Christmas cards - without really factoring in how detailed and repetitive each one would be, with lots of steps at every single stage. I ended up with two times four each of very similar colourways - thanks to using a lovely Altenew 7" wide washi tape called 'Watercolor Nebula'. The repeat of the pattern is predominantly red/indigo sky then turquoise/purple, so that's how I ended up with four of each - the change in colourway does have a fine dark coloured line dividing it so I had to dodge those as well.

It's only fair to say that working with such wide washi tape is trickier than narrower ones - plus due to the 'skyline' size I ended up trimming what was supposed to be a much taller background to make a 4" square. Wasteful perhaps, but needed IMHO, for these cards to end up more balanced.

Here's two of the eight cards I made: 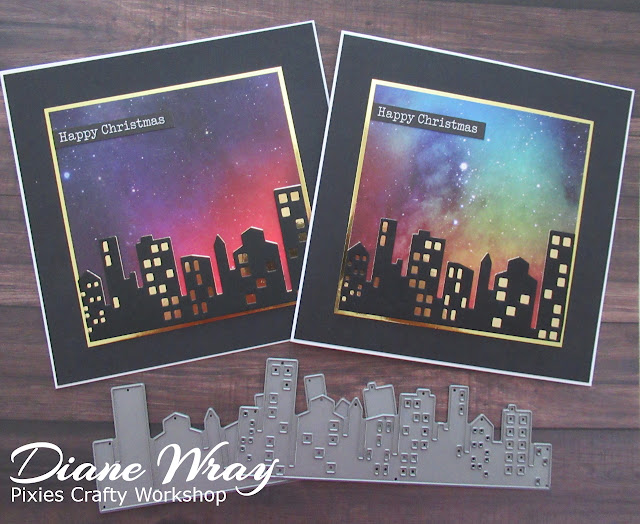 - very slightly smaller square of black card to leave just a tiny bit of the white border showing - deliberately, due to the white writing on the sentiment strips I planned to use

- and that's how the fight started - an expression which always makes me smile. See an example below to get the idea ***

- cut USA sized A2 pieces of white card ready to cover with the washi tape - Altenew's 'Watercolor Nebulus' and after a good bit of wrestling ended up with eight covered rectangles. Remember, this was a bit of a voyage of discovery for me. My tested way (see HERE) of adding washi to a piece of card worked well. It was more a question of trying to place the design to get the best out of it - and also avoid those dark dividing lines between the colour change

- as said earlier - in the end I trimmed the panels down to 4" x 4" as the skyline wasn't too 'high' on the taller card and decided to go for square rather than US A2 rectangular cards - waste, waste, waste - to Altenew it equals profit methinks ☺

- by now I was lying on the floor on my back like a toddler drumming my heels, with Dudley joining in for fun, he's a great little heel drummer to be honest - and it was almost Day Three for goodness sakes!

- once again I walked away in disgust and felt quite dispirited

- totally ignored the mess on my desk in Day Three and fiddled around with grocery deliveries, letter posting and such

- back to work on Day Four and added the Clarity sentiment strips (from Clarity's 'Christmas and Celebrations' word sticker set) - really great if you're in a hurry or contemplating just giving it all up - to the upper left hand side. Had to use red line tape in the end as the washi and Clarity 'sticky' didn't wanna be friends and hug one another nicely

- then - finally - added the panels to the assembled card front and called it a day - Day Four to be exact!

What did I learn? Mostly not to dive into a big 'batch bake' without even just mentally listing all the steps first to get a feel for what you're letting yourself in for. In future, I'll stick simpler designs and steps - this almost finished me off!

I'm also adding this into Darnell's NBUS Challenge #27 because it's the first time I played with this particular new washi tape - although certainly not the first time I drummed my heels on the floor in anguish! ☺

And before I forget - here's an example of 'and that's how the fight started':

*** It was a lovely warm sunny summer Sunday so I decided to drive my family to the seaside.

After driving for a while the children started getting restless and asked "Where's the beach daddy?".

I replied, "She is right beside me in the passenger seat"

And that's when the fight started.

I found LOADS of these little gems - many made me cry with laughter - but this one just grabbed me as being a little less personal then others. Happy days!