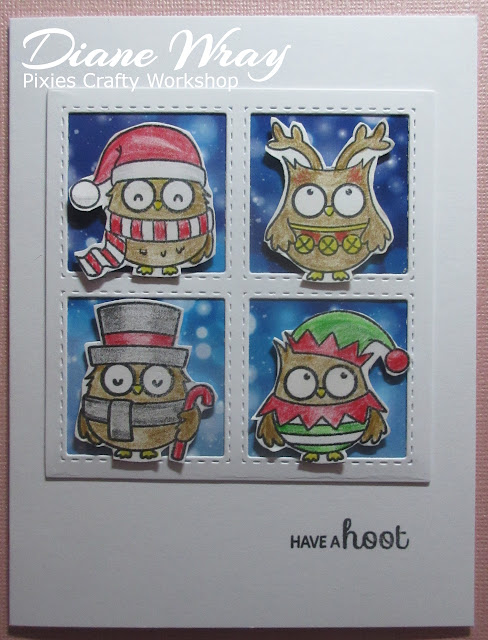 - snippet of white card for four squared frame, which I die cut using JustRite's'Set of Four in a Frame' die set - which I've had for years and this is its first outing, shame on me!

- I then cut a snippet of Whimsy's ''Blurry Flurries paper to fit behind the 'windows, which I then backed with another snippet of white card

- then stamped the owls onto another snippet of white card, using a Clearly Besotted 'Christmas Hoot' set of stamps and Memento 'Tuxedo Black' ink

- before going any further, I stamped the sentiment, using another stamp from the same set and Memento 'Tuxedo Black' ink and also the 'window frame as a guide to positioning the sentiment

- then glued the 'frames panel' on place

- added the owls so they're standing on the dotted outline of the frames, using thin sticky pads, and called it done!

Phew, the final card for the challenge - made in the nick of time. I happened to have the Whimsy snippet of paper lying on my desk but just plain coloured card would have been another option as the owls do fill out the squares. I did eyeball positioning the 'frame panel' but, as suggested by Shaz in Oz when I was whining about my Uniko tree being 'on the wonk', I actually DO have a T square here bought years ago - which I'm generally in too much of a rush to use even though it's in a drawer right beside me! Believe it or not, it's the second one I purchased. The first one was out of alignment and it was a well known brand - so much for precision tools. Once I got the new one I offered the original one to Len - who rightly commented that it would be as much use as a chocolate fireguard!

I do love this set of Clearly Besotted stamps, sadly it doesn't have matching dies but the owls are really easy to cut round. I also  think it would be fabulous for making Christmas gift tags. It has a few other sentiments, including  the rather cheesy 'Owl I want for Christmas is you'. 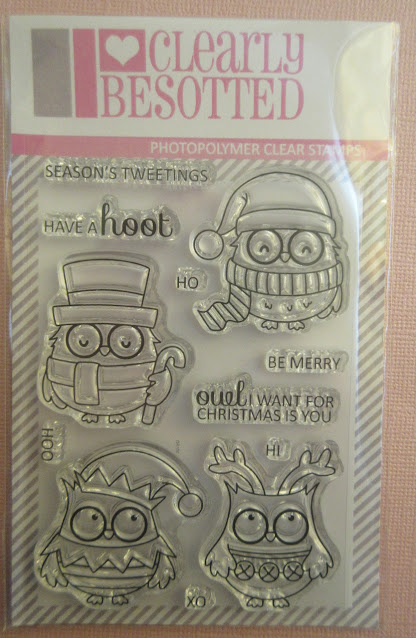 It's the Clearly Besotted 'Christmas Hoot' set of stamps, the same as I used today, and once again you have three chances to win a set!

At the end of all of the celebrations I'll do a massive draw session for all the prizes (21 in total if you include the multiples with three chances) using the one Mr Linky - which is on the main snippets post HERE along with details of exactly how to join in - so you do need to have entered one snippets make over on that post during the three weeks that the challenge runs for to be in with a chance :) Maximum of one entry please - to keep things fair for those who may not have time to craft. Mr Linky closes at 11am on Saturday 9th January so you do need to have added a snippets make by then to be eligible for the draw.

So we're at the end of the prizes now, although you will still have until 11am on Saturday to add your ONE entry to Mr Linky and also to comment on any prizes you would like to win ................ where I haven't yet turned off commenting yet. Sadly I had to do that due to a rush of consecutive comments from a few people - which is exactly what I didn't want to happen. My faith has been rocked and I don't know what will happen this coming Christmas.This final prize will show who's actually checking the Challenge out regularly I suspect ☺

On Sunday we have a Guest Designer with a snippets card featuring the prize they've donated to the challenge - and we'll be back to a new challenge every fortnight.

The results from this Grand Draw will be published on Sunday 17th January. And, although I've been closely watching comments and keeping very meaningful notes, I admit to being woefully behind on commenting on your entries. I aim to put that right sharpish!

So far this new lock down seems no different to us - Dudley is cosy and we're staying safe. Hope you are too! Apparently panic buying has reared up again and the toilet roll bandits are out and about!

Dudley, the little monkey, has a new trick, he finds a new hiding place as evening approaches and time for his daily groom looms up. How he knows is beyond me as the grooming basket isn't in place and life is just the same as usual until it's 'that time of day' - but he certainly knows!

He's getting quite inventive with the hiding part and yesterday we were really worried he'd managed to get out of the back garden as he was nowhere to be found - and there was absolute silence despite us calling all around the house and garden. It would be impossible for him to 'do a runner' from the back garden, unless he managed to get a set of ladders out, but everything goes through your mind. I eventually found him, pressed absolutely flat lying along the far side of a coffee table, hidden by the lower solid wood shelf. Just a pair of dark brown eyes were peeping at me above said shelf. So hard not to laugh and a huge relief as well. The little scamp actually showed me his teeth when I bent down to pick him up - so I bared mine right back at him! Nicely of course but I do hope the message got home!

Love from Parsnip, Dudley the Dodger - and of course me,