Happy New Year! At the time this publishes, the clock will just have ticked into 2020. We might be up and about, or not - depending on the fireworks situation. I've never been overly keen on New Year celebrations - they often seem so forced, IMHO.

And, the hunt for the thing that's tripping the RCD continues. It tripped again this morning around 7:30. We're closing in on the cause - it seems to be connected with dawn and dusk (Little Miss Marple suggested that but of course can't take any credit, sheesh) - and Len has removed all the time switches which operate things such as lights, cameras etc. We know some of the parameters, yet still haven't pinned it down. Having said that,we didn't have the usual 4pm one today (dusk here in Hampshire) - which seems to be narrowing it down. It's a bit like playing Sherlock Holmes really. Gonna buy Len a deerstalker hat, cape and a Holmes style pipe when he's managed to sort this mystery out!

Anyhow, I did manage to make a sample card for today's prize - yay! 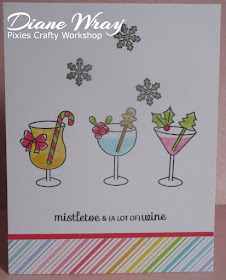 - snippet of white card stock onto which I stamped the image and sentiment using Memento 'Tuxedo Black' ink and stamps from a Clearly Besotted set of fun stamps called 'Drink & Be Merry', including the sentiment and also the snowflakes

- added the striped strip of paper to the red strip I'd just created, using a narrow tape runner

- then added the whole strip to the bottom of the image panel using a tape runner again and trimmed off the excess at both edges, from the back

- finally, glued the whole panel onto the card front - finished!

Important - I did wonder if I should have 'grounded' the bases of the glasses but as the card was totally finished, photographed and this post written I left it....... but have since added some grey shadow, which does make such a difference. They're no longer levitating like alcofrolic balloons:).

These images were an absolute delight to colour using pencils - and safer for this flipping shoulder! When I coloured the Clearly Besotted reindeer with Pro markers the other day, I managed to lift the big acrylic purpose made stand they live in from the top of a fairly high book case onto my desk - but really don't think I did myself any favours stretching to put it back afterwards! It's quite heavy as it's fully loaded with around 150 markers. Lesson learned and not one I'll repeat. Got my wrists slapped by Len for that one! 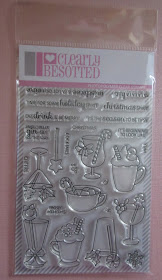 Here's the image from CB's website so you can see the sentiments properly:

A Clearly Besotted set of fun stamps called 'Drink & Be Merry'. This is so weird, I only bought these very recently and yet the set shown on their website actually has one or two fewer stamps such as the 'snowflake' and the word 'Hic'. I do think the girls 'tweak' their products and add more things as they think of them. The stamps are produced here in the UK, and  their dies are made in the USA - I admire them for that. The sentiments are good fun and one of them is especially great - 'Jingle bells, gin-gle all the way' - perfect for Jane W who has some fun 'gin based' stamps? :)

Commenting for all prizes will also be turned off at 11am on Saturday 4th January to coincide with the draw closing. To give people a fighting chance of checking and commenting on today's prize and the very final one, I will be adding the last prize on Thursday 2nd January 2020.

Here's a little 'heads up' that the forthcoming fortnight's prize is very likely going to be Christmas related................. again, I hear you sigh. It's too good to rush the making of a sample, and I so want to make one for it, plus I think it stands on it's own as a fortnightly prize quite nicely.

Hope that 2020 is kind to all of you - with happiness and health at the top of the list! Followed closely by crafting, and trying to reduce 'Mount Snippets' of course, grin :)

Edit - would you believe it - 6pm and already the fireworks have begun. Thankfully in the distance, but one little chaps 'onesie' is being popped onto a radiator nearby,  in case we need it as a sort of thunder shirt.