Gold and silver for Christmas

I recently made some Christmas cards using alternating gold and silver trees on white and decided to use those 'colours' again yesterday. This time I made four identical cards - and at the same time used a Poppystamps die that had been faulty the first time round. Thanks to Donna's help I was eventually sent a replacement - which I'd never dared use until now - it works like a dream! Thanks again Donna and also Poppystamps.

Here's one of the cards - so hard to photograph gold and silver though: 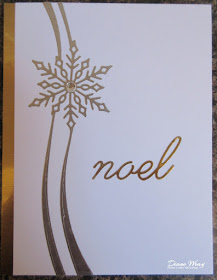 - a strip of gold metal effect adhesive sheet made by X-Cut down the spine edge of the card, cut wider than I wanted it to be so it would be tucked under the white layer I planned to add later. In fact, I added the metallic strip before I cut the folded card exactly to size - saved worrying about the strip not being quite the right length, then set the card blanks to one side

- piece of white card stock, trimmed to the same size as the card top to bottom measurement and then quarter of an inch narrower from side to side to allow the gold strip to show down the spine edge of the card

- die cut the Poppystamps 'Noel Snowflake' using gold metal effect sheet, snipping off the dangling snowflake, and pressed that onto the white panel

- ran it through the Cuttlebug, using the embossing plates and an embossing folder as a 'shim', which as I've said before gives an almost 'foiled look' to the die cuts

- to add the panel to the card front I used a mixture of two adhesives. I suspected that the card might not stay stuck to the gold metallic strip but at the same time wanted some 'wiggle room' to make sure the front was lined up properly. This is how I did it - first stuck a strip of quarter inch wide red line tape down the reverse of the white panel, along the edge that was going to be stuck onto the metallic strip and left the red protective covering in place (when that tape sticks it won't let go!). Then filled in the rest of the back of the panel with Collall All Purpose Glue and wiggled the panel gently onto the card front. When happy it was perfectly lined up I then used fine, pointed, tweezers to ease the spine edge of the panel up and peel the protective covering from the red line tape before pressing it down. Worked a treat!

- toddled through to my in-house critic to ask whether I should add a few sequins or not. The verdict was in line with my own thoughts, step away from the podium and leave it well alone!

So, have managed to reach my end of August target at least 😀 And, credit where it's due, I found the basis of the idea for this design on Pinterest - needless to say I can't find it again!

I'm struggling here, Mr Mojo seems to have gone on his holidays! So, my 'non-Snippets Playground' posts may be fewer than normal