That's the name of the backing paper I used for this card. But, having read the lyrics to the hymn, which is 'Hark, I hear the angels calling' I don't think it's actually a Christmas hymn. However, Magnolia produced this lovely soft and slightly shabby looking backing paper for their  'A Christmas Story' range so who am I to get picky over the fine print: 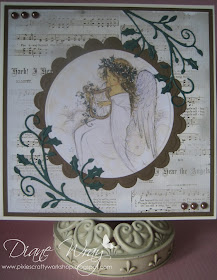 - backing paper by Magnolia, 'Angels calling' from the 'A Christmas Story' range

- SU 'Soft Suede' plain backing card, behind the patterned paper and also used to die cut a scalloped circle using a Nestie die - and the brown does look softer in real life :)

- the holly flourishes were fun, I wanted those to pick out the holly in the angel's head dress but a frantic search here revealed that I had not one teensy little scrap of dark green card (I'd used it all up on my snippets card yesterday) - so out came a 'Holly' coloured Pro Marker. I coloured a scrap of white card, then let it dry thoroughly before die cutting it - the flourish is quite delicate and it struck me as easier than risking wrecking the little swirls, even though potentially wasteful in terms of Pro Marker ink I guess. The die I used is Cheery Lyn's 'Holly Flourish' and I ran the flourishes through the Xyron to add the sticky backing

- no sentiment again, really wanted the image and  backing paper to speak (or even sing) for themselves. Not even one sign of ribbon or a bow, for the same reason - but I did add three brown pearls in each corner :)

This card was made especially for a challenge I try to enter each week, Craftyhazelnut's Christmas Card Challenge and this week's theme is 'music'.

And am also linking this into Hazel's monthly challenge too, where it's always anything goes.