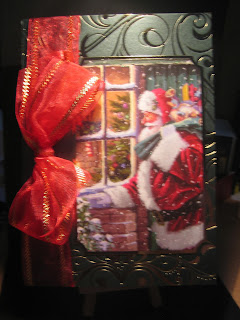 Today is always a sad day for me. Living in Germany for many years meant that 6th December was a celebration, but my lovely Dad died, many years later, on 6th December and since then I can't bring myself to put the tree up or anything, beyond making cards, until that date has past. I know, if he was here, he'd kick my rear end for being daft. When the dreaded call came I was baking six different Christmas cakes for him and the rest of family and I haven't baked one since either :(

And, exactly 30 years later today, I still miss him - although I do remember him whenever I look in the mirror and see I have his nose.....thanks Dad!! I know that John Lennon was shot a couple of days later and it totally passed me by as I was so consumed with the most awful raw grief of my own. But, everywhere these things happen and we do pick ourselves up and carry on, although never the same as before.

But, onto brighter thoughts - here's a very typically German style Christmas card (it's A5 - from my KanBan box of goodies) complete with huge lush red bow from my ribbon stash! Very OTT, but then Dad was always quite flamboyant and I'm sure he would approve. One of my young neighbours (20 years younger than me and still in touch) from those days apparently used to think he was David Niven ( perhaps that's why I can't help but shed a tear when watching his films)  - maybe now you get the picture of a mixture of elegance, a gentleman with panache, mischief and that twinkle of slight wickedness?!?! And I still miss him...............sigh. But I bet many of you also miss your own Dads too so I'm not really alone - although I also bet each and every one of us thought ours was the best one EVER!!