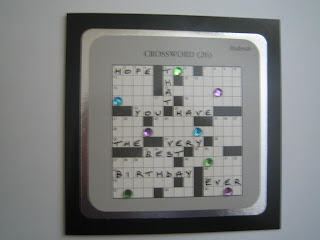 This was just a bit of a fiddle around yesterday when there was a brief lull between builders coming and going. A few weeks back I found a box of 're-usable crossword cards' in our local Hospice shop. The kind that come with a non-permanent marker... and a little idea formed in my head as I'm sure we all know a crossword addict!

Making this card was so 'simples', and this just shows the idea as it would be better to have more of a mix of down and across words - and better spaced and different little gems, puffy flowers/hearts or whatever. Apart from all that, which is pretty much everything, here it is for what it's worth as a prototype :)

The crossword grids are on beermat sized, rounded corner, wipeable card. I just matted one onto slightly larger silver mirri card also with rounded off corners, then added it to a glossy black card (from The Works and a snip of a bargain, but the shop is no longer there!). The lettering, my writing is grim but then who does a crossword all neat and tidy anyhow, was done with a permanent pen - which does dry indelible given enough time, providing you resist the urge to keep checking it :)). Then I added a few KanBan gems from my stash....as I said, simples!! :)