What a palaver this week just gone, sorting out Feedburner which sends emails out to those folk who've subscribed to this 'ere blog - after it just stopped sending them. It's now been amended and is working properly - phew. I do recommend that any of you with very wordy blogs such as mine (photos and media don't count) have a think about the fact that when you reach 512Kb - Feedburner can't cope if you've left the limit of posts which it scans to the 'default setting'- which is your whole blog. You don't get a warning - it just stops sending emails. For any techno-averse people - don't fret over it as your blog will still remain safe. For anyone who might feel happy digging around inside Feedburner (which is also Google product so need I say more) - if you drop me an email with Feedburner in the header then I'll happily help you out with a few pointers.

I see Blogger has been playing around with the new interface yet again - this time they've changed the icon which appears when you click on an image to change it's size. Previously it was the pencil icon - now they've added a little image icon. The pencil icon is now used to change a link if your image has one. Someone certainly 'designed these changes on the fly and on the back of a fag packet' as we used to say in the olden days!

Anyhow, here's my snippets card for this fortnight. Once again I needed to make a fairly simple card to showcase our prize for this time round - and here it is: 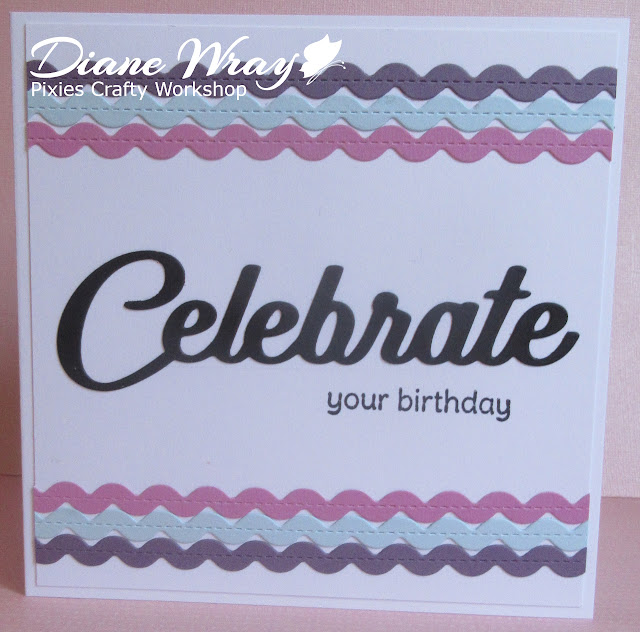 
- 5.75" x 5.75" square white card blank
- a piece of the same white card, trimmed to 5.5" x 5,5"
- longish narrow snippets of mauve, blue and pink card from the snippets folder
- from each snippet I die cut two lengths of 'ric rac' using MFT's 'Stitched Ric Rac' die
- then glued them across the top and bottom of the white panel, using a Zig glue pen
- die cut the word 'Celebrate' from a snippet of black card using the lovely Hunkydory Moonstone Combo set called 'Essential Words - Celebrate' and glued it in place

- finally glued the white panel to the card front and called it done!

I just double checked and the word Celebrate is absolutely straight - the very large letter C draws the eye downwards at the left hand end, but it's an optical illusion. When I added the large die cut word I even drew a fine pencil line to be sure it would be straight!

Love the ric rac die - first spotted on one of your lovely blogs and a super way to use up snippets for quick and easy cards.

And, here's the prize for this fortnight: 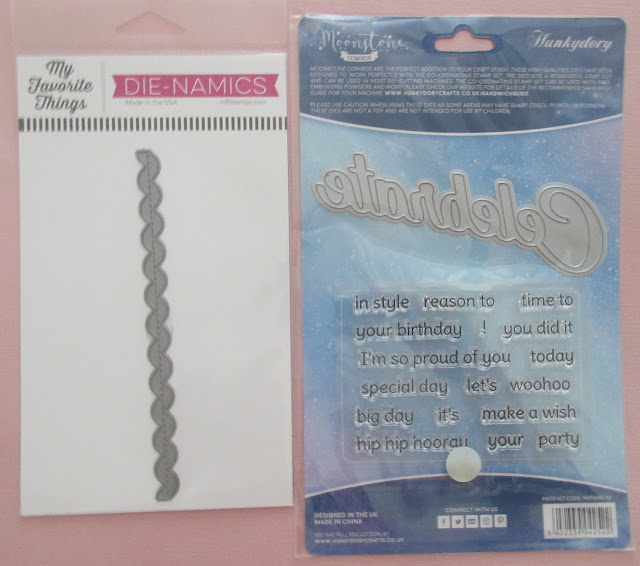 As always, the Snippets Challenge will run for two weeks and the Playground gates will close at 11am UK time on Saturday 3rd October. The gates will open again at midnight UK time on the same day.


Remember, if you link into the Playground and don't say clearly that you want to be in the draw in a comment on here, then you will be bypassed if your name comes out of Mr Linky. I'm sure you all know I ask for a positive 'yes' on the blog post itself - just in case you're only playing for fun - otherwise I don't add you to my little list.
As I used the MFT die as well as the sentiments set for the very first time it means I can join in with Darnell's NBUS #18 challenge HERE!
I did wonder if this challenge might need to be delayed - both Len and I felt pretty grim after our flu jabs on Thursday and it was such an effort just to crawl out of bed at first. However, Len was worse than me (for once) so I just bashed on and hoped this would publish as planned. It's Saturday as I'm typing and am finally feeling lots better - so strange that we both felt unwell, along with very sore arms. We had to take Dudley with us and one stayed with him in my car whilst the other one went for their jab then we swopped. Oh boy, did Dudley let rip! He panted, yammered and yodelled all the way there and he only shut up when I joined in the chorus making similar sounds! Thank goodness the roof wasn't open - we'd literally have seemed barking mad! The only time he did go quiet was when Len went in for his jab, after I'd returned to the car, he'd apparently continued his performance all the while I was away.
We had some fun earlier on in the week. Len always replenishes the hedgehog's food and water later on in the afternoon and all of a sudden he shot up to my craft room looking pretty shocked, waving his arms and saying there was a hedgie sitting inside the feeding station fast asleep. So off I trotted with him and sure enough - there was a huge hedgie actually sitting on the dish of dried food having a good snooze. We have to protect the hedgie food from the local cat population and due to so many hedgies visiting Len had used a second feeding set-up which is an upturned washing up bowl with an entrance cut out. The daft hedgie had obviously squeezed it's way in but couldn't turn round to get back out! We took a good look at the'prickly football' and it was no worse for it's extended visit so Len put it into the front garden underneath the hedgie friendly undergrowth where we suspect it probably lives. I managed to take a photo and although it wasn't going to unfurl again and pose nicely, you can see it's jet black beady eyes. You can see how huge it is as Len is holding it wearing really massive heavy duty gardening gloves. The little patch of white at the bottom right of the photo is Dudley - nosy as usual: 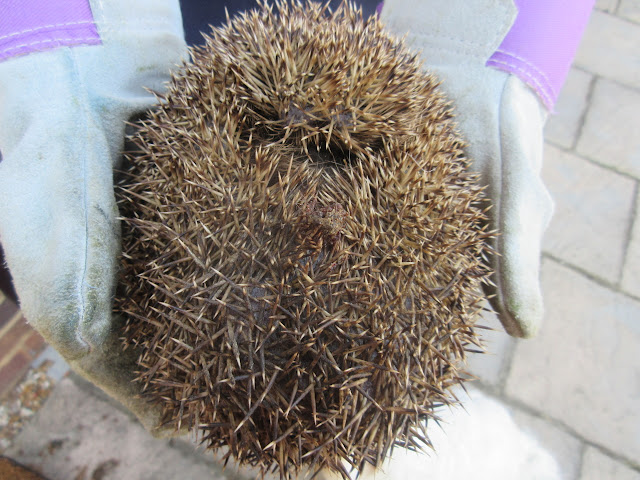 On the subject of hedgehogs, and other wildlife as well - do remember that if/when you dispose of a mask with your waste please be sure to cut the elastic loops. They will end up in landfill (unless you burn them) and could so easily harm or kill wildlife.

And last but not least, I promised some photos of the lovely laser cut shepherd's hut card I had from Len. I do encourage you to have a look on the website he ordered it from - the detail is incredible and although we love to make our own cards - who wouldn't be delighted with a card from 'Paper D'Art'. BTW, it's a British company, based in the beautiful Cotswolds, with a massive range of gorgeous cards. 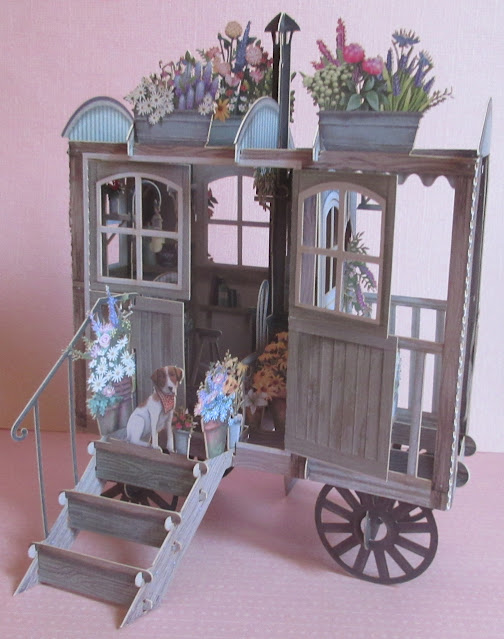 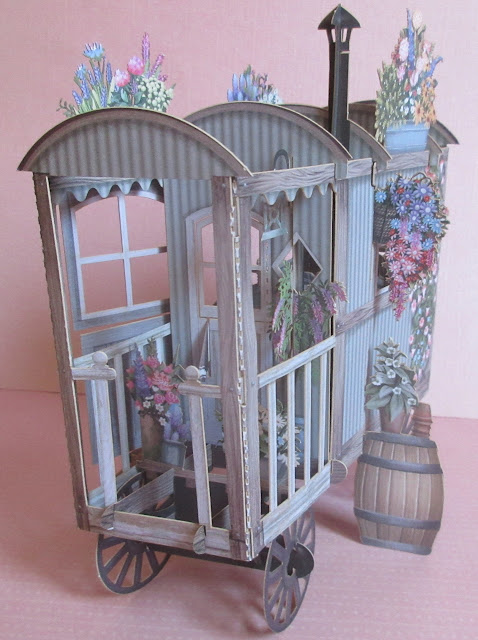 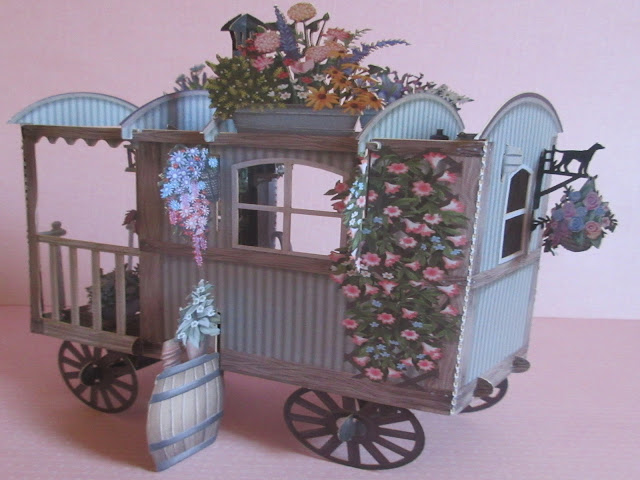 The card folds flat and when opened out stands at about 6" long and 6" high. I took one photo trying to show the inside view but it's a bit blurred - although it does give even more of an insight into the beautiful detail and thought that's gone into making the 'hut': 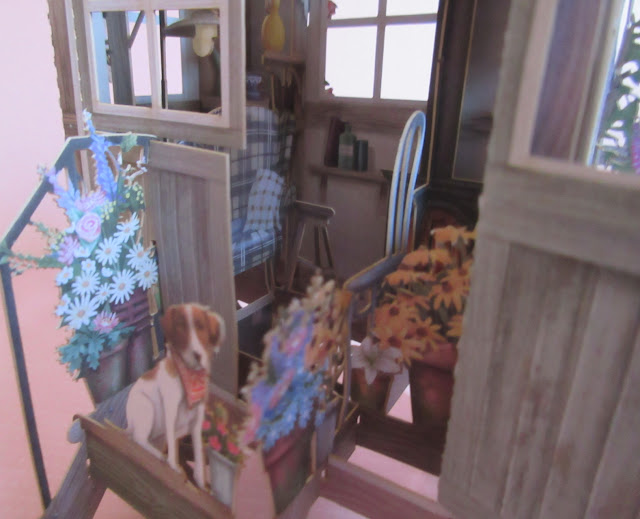 Shepherd's huts are quintessentially English (they were very much based in the South Downs and in this part of England) and their origins go back centuries. Basically, particularly during the lambing season, the shepherds hut could be relocated as necessary and provided shelter for the shepherd to be close to his flock. It would have had space for a pot belly stove, intended for basic cooking and warmth, a bed and sitting area. There was usually a corner cupboard for bare essentials and veterinary medicines. The bed would often accommodate space underneath for unwell or orphaned lambs.

In recent times they've made a comeback and quite a few enterprising people are buying newly built ones, still sticking to the same principles, albeit some even have washroom facilities on board, to rent out as holiday homes. I've been following one such owner on Instagram and it's fascinating to see how neat and compact a shepherd's hut can be. And Len, when he ordered the card, had absolutely no idea that I even knew about them let alone was fascinated. So it's a double delight of course! Sadly, they're fully built prior to delivery - what a fun summer house one would make. But our back garden is fully enclosed and the only option would be to hire a gigantic crane to lift it into place. Edit - oooer, I just found a company who will build one for you on site. I wonder....................?