Birthday card for someone special

A lovely friend recently had a Birthday, and this is the card I made for her: 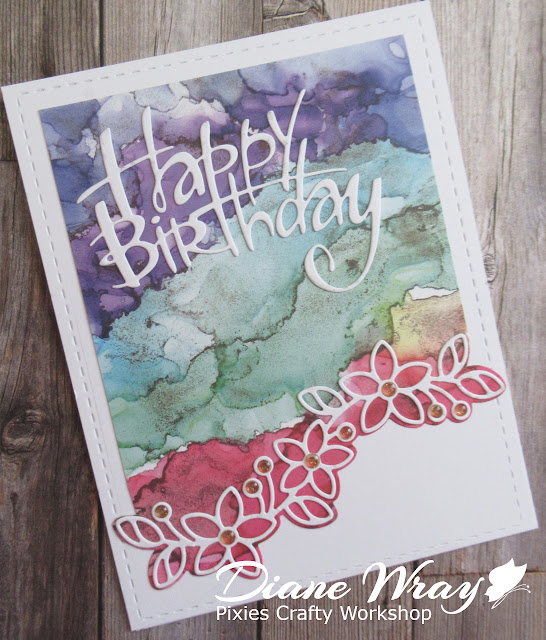 - a layer of the same white card for the front panel, die cut using a Lil' Inkers 'Stitched Rectangle' die and set to one side

- used a sheet of patterned paper from a Honey Bee 'Team Tie Die' paper pad and die cut the bottom edge using a die from the Simon Says Stamp 'Flower Swag' set of dies - more of this below!

- die cut the sentiment from another snippet of white card, using a Presscut die called 'Happy Birthday' and glued it in place

I had three attempts at getting the patterned layer as right as possible with the die cut edge at the bottom. Almost lost the will to live and, having watched a YouTube video I now know exactly how to do it of course! I just wasn't thinking properly on the day and the more I tried the more of a flap I got into. It's a stark reminder to look for a video when fiddling round with something where I'm unsure about measurements. The result is passable but not as wide as I wanted - still, said friend is a crafter - which always means that even if your best attempt goes a bit awry - they do understand!

Final say on the die cutting machine adventures. The two Gemini pale green 'double sided dies' cutting plates are brilliant! You use them as the middle part of the cutting sandwich which then only has the two clear matching plates on the outsides. No magnetic shim or thin plastic shim needed. Yes, the plates do score, as one would expect, but nothing like the clear plates score - and absolutely no bending occurs to any of the plates in the sandwich! It's early days but so far I rate it one of Jennifer McGuire's best ideas!

I'd like to enter this into Darnell's NBUS Challenge #37 HERE.

Thanks to a prompt from Pauline on the Allsorts DT, I'm also linking this into the current Allsorts Challenge Week 673. The theme is 'Something beginning with B' and so I'm using 'Birthday and Background' for my take on 'B'.

Do remember, today you can find the results of Challenge #425 over in the Snippets Playground HERE.

Also, from Monday 25th April to the end of the month it's ScrappyMo's Rudolph Days Challenge.

No real news about Dudley this week, although we did give our local sorting office a giggle apparently. We had something to return via Click and Collect and the online form asks you to declare if you have any dogs on the property. So I typed in 'One small dog, with big bark'. As it happens it was Steve, our regular postman who collected the package and with a huge grin he wagged his finger at Dudley and said 'You're famous now boy'!