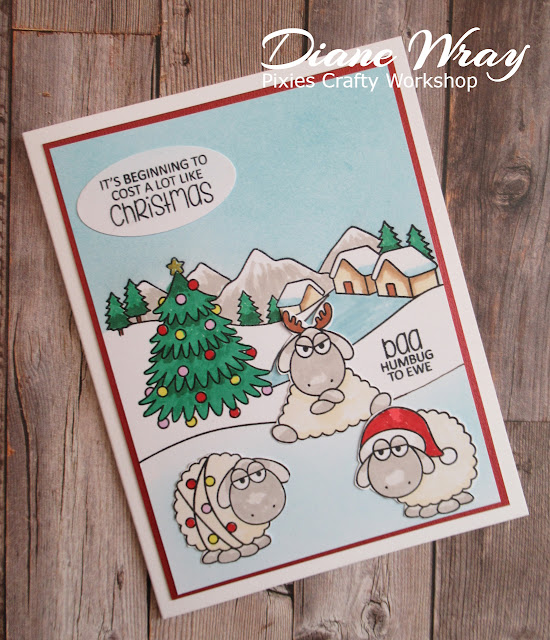 - then the fun began! I was using two Clearly Besotted stamps sets - 'Picture It Christmas' for the scene and 'Baa Humbug' for the sheep and a sentiments

- right now I can hardly move in here due to the Grand Draw crafting frenzy having taken over my life so I couldn't easily get to my sheets of masking film but just used 'fully adhesive' Post-It notes - bit more fiddly as I needed two side by side for the scene but it worked well, with careful fussy cutting - phew!

- first of all, stamped then masked off the scene image, top and bottom cut to the lines and those fiddly little trees in the distance - I used my much loved Tim Holtz 'Tumbled Glass' Distress Ink pad and a make-up brush for this step, keeping the lower part of the scene lighter than the sky. Again, I have an Altenew fabulous set of four shades of blue that would have been perfect but just can't get to them right now! One BIG sort out is well overdue but at least I pop stuff into fairly organised 'used, supplies, unused new stuff to put way etc.) baskets - ready to have a blitz later on in January

- next I stamped the three sheep (all stamping was done using Memento 'Tuxedo Black' ink and a Misti as usual) and coloured them, bearing in mind colours that could also be used for the background to draw the scene together - and after months I finally got to use my Pro markers again. Hooray! Len did the 'reaching up, lifting down and then replacing once I finished' to be on the safe side but I do think I could have managed it myself - hooray!

- used the scenic back ground as it was, untrimmed, and coloured it in, using the Pro markers I already had used for the sheep, plus a few additional ones

- positioned and checked where the sheep would go and then stamped the 'baa humbug' sentiment. before glueing the sheep in place

- and then stamped the final sentiment at the top left of the card - and it blurred! What? Right at the final hurdle as well, sob

- ran around the house screaming like a banshee for five minutes and then just re-stamped the sentiment onto a snippet of white card and punched it out using a SU oval die, before glueing in place

- finished - and then I headed for a darkened room to lie down for a few hours!

I'd seen a very similar card design to this one, over on Clearly Besotted, and loved it, which is why I bought the background stamp to go with the sheep - and it will be great to use with loads of other Clearly Besotted or a lot of other sets of 'cute' stamps.

And here's the prize: 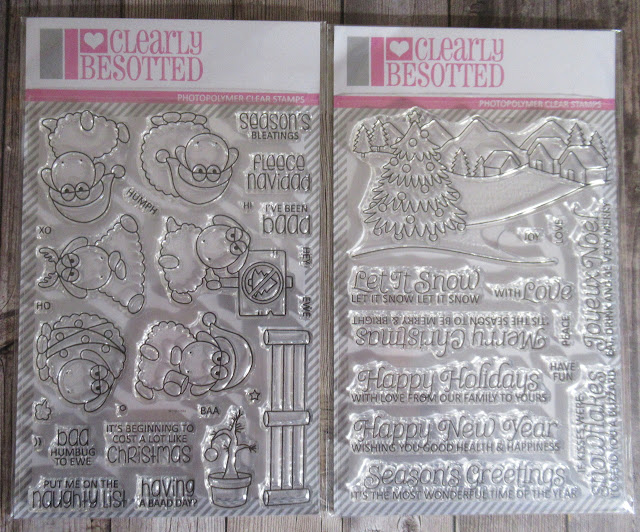 It's two sets of Clearly Besotted stamps from me - 'Baa Humbug' and 'Picture It Christmas'. Sorry a few of the stamps aren't the right way up in the packets - obviously the way the manufacturer packs them to get the optimum number of stamps on a sheet! Two great sets of stamps - those sheep and the sentiments crack me up and I love the snow scene and all the sentiments on the other set. ☺

Remember, the Grand Draw challenge, including all comments, will totally close at 11am on Saturday 8th January.

We have now donated £300 (including Gift Aid) to USPCA, the charity in Northern Ireland that rescued Lynn's beautiful Westie Ruby and it's all been down to your lovely prize donations. Thank you all so much.

All that remains is for me to also thank you all for joining in, all the lovely comments, a massive thank you to Sarn for pitching in and helping me out with commenting, being my 'wing gal' and a million other things - and once again, those of you who kindly donated prizes. I hope you all had fun in this very last Grand Draw. At times, I've almost been on my knees here. However - onwards and upwards! Ha - if I can get up off my knees! ☺