Mia, the eldest 'not so little', grand daughter over in Germany just celebrated her 14th Birthday. It only seems like yesterday when she was a little tot!

Mia is still very much into dancing and I used a 'pre-loved' stamp set, bought from a de-cluttering FB group, for her card - I just love the pure joy of the dancing figure: 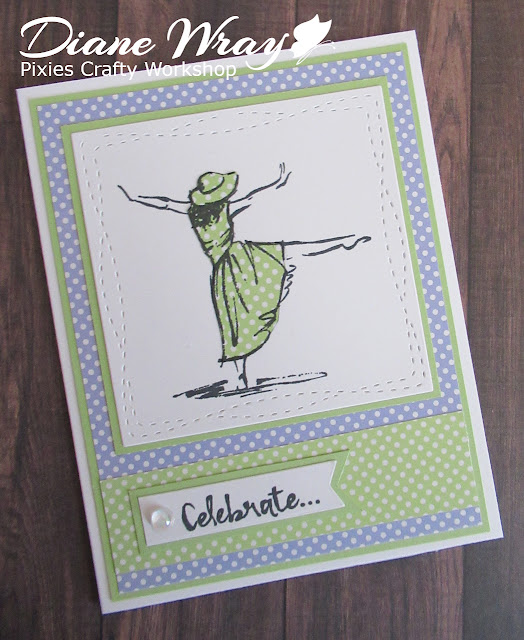 - dotty patterned paper from Dovecraft's 'Back to Basics 11' paper pack in lilac and soft green, the green was snippets and also cut into a whole sheet of lilac

- next stamped the dancing figure onto a snippet of the dotty green using the Misti and Memento 'Tuxedo Black', fussy cut it and edged right round the cut edge, sideways on, with a black Whisper pen

- then, and only then, did I die cut the image panel using a Creative Dies 'square 'Wonky Stitches' die

- used SU's 'Certainly Celery' for all the plain green 'frames', again - one snippet and then cut into a whole sheet

- trimmed a piece of the lilac dotty paper to just a bit smaller than the green frame and popped a strip of green dotty paper over the lower area to 'pull' the image and rest of the card together. I glued it in place and then trimmed off the excess from the back

- then I took the second try at a stamped sentiment, from the same set - which in truth had stamped way to heavily at first attempt, just below the dancing figure, sob - thankfully before I actually decided on the die cutting size and shape

- mused for ages and just couldn't find a lilac gem to match so settled for a Lucy's Little Things 'Bubbles' domed embellishment as a change from a white pearl, glued in place using Glossy Accents, as a finishing touch

I do so love this stamp set of SU's and will certainly use it more frequently. It has three 'figures' in total and each one lends itself to paper piecing. Plus lots of lovely sentiments.

I'm linking into Darnell's current NBUS challenge #31 - it was a first outing for me using my 'Beautiful You' stamp set, and possibly only its second ever outing (the previous owner had only used it once).