Allsorts Challenge and tribute to Kath

I've already written a good bit on here about 'our Kath' from 'My Plain and Simple', who we all lost a few weeks ago. On Sunday I made a card for the current Challenge for Kath over at Allsorts - where Kath was a DT stalwart. The theme was chosen by Kath months ago as part of her usual DT role and she chose 'Favourite Stamp(s)' - and the DT have added the option of 'floral and paper piecing'. Two things which appeared on Kath's gorgeous cards very regularly.

And this is my card: 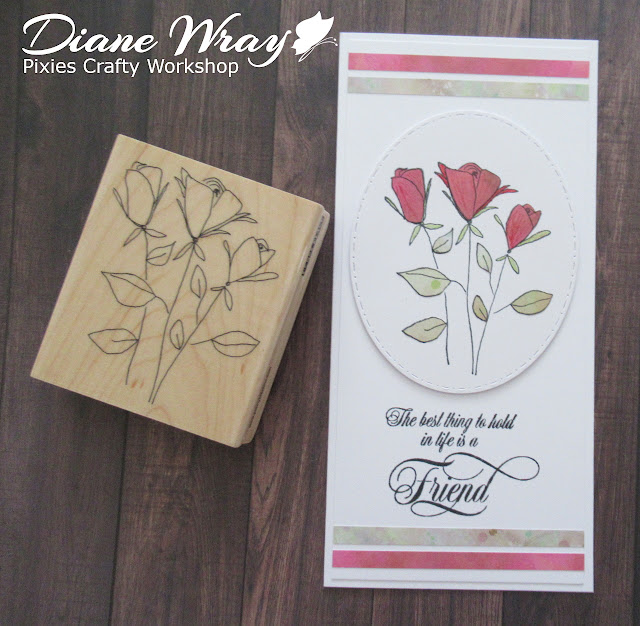 - the front (or back?) half of a DL card, trimmed to an eighth of an inch smaller all round than the card front and then set aside

- one of my most loved, and oldest, stamps is Penny Black's 2007 'love blush' - so I used that and Memento 'Tuxedo Black' ink to stamp the image onto a piece of white card and also onto a couple of sheets (red and pale green respectively) from the Prima 'Firefly' paper pack

- peeled the oval image panel off and then popped it back in the same place using thin Ultratape sticky pads - I love these as they give dimension without being too thick and can easily be snipped into small piece for adhering small images etc. to cards

- glued the whole front panel to the card front - finished!

As SaRn said, Kath would have had something to say about the 'tongue out' look of concentration that we all seem to assume when doing paper piecing!

You still have a few days left to join in with the Challenge for Kath, link at the top of this post. It runs until 12 noon (GMT) on Friday. Quite apart from being a tribute to a very talented lady, there are also some lovely prizes to be won.

Edit: Many thanks to Barbara for the heads up to The Sisterhood of Snarky Stampers where the current challenge theme is 'Paper Piecing'. My first time playing along and apparently a snarky sentiment isn't necessary. In fact, I always thought it was a 'closed shop' and not open to all. How wrong can you be. I did smile at Barbara's comment along the lines of 'Who would think to paper piece flowers and leaves' - given the tiny size of them, my reply would be 'Only an idiot like me'.