Well, that's one week I don't fancy repeating. I did a little post last thing on Thursday to let folk know that Dudley came through his little op. fine. He was still very groggy and twittering like a little bird when we brought him home. We've have such a lot of good wishes for him - they're certainly helping us to get through quite a distressing time and I'll add a later update further down this post.
First of all, let's get going with this fortnight's picks:

Liz really came up trumps, creating no less than 17 cards! To see how she did it, do hop over to Liz's blog HERE - she's very kindly got the sketch of how she divided the sheet of paper up there for us to see, Amazing! 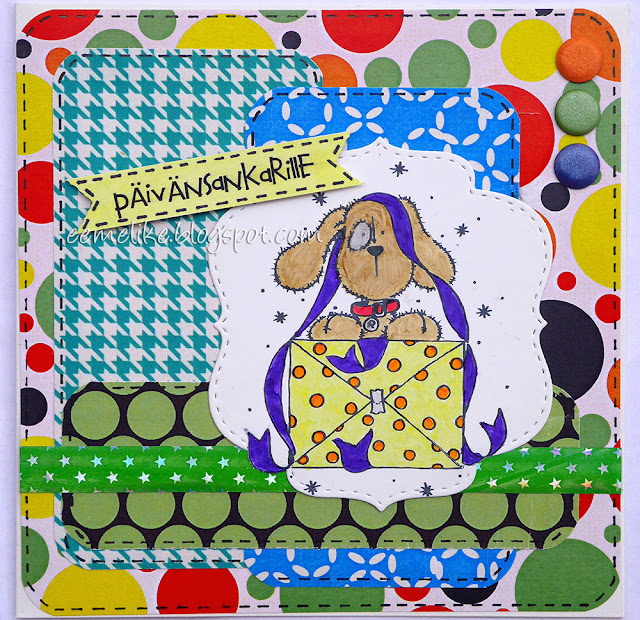 Eemeli used a ton of different snippets for this lovely card  - and she was brave enough to colour the image first and THEN go on the hunt for snippets to pick out the image colours - very impressive indeed. 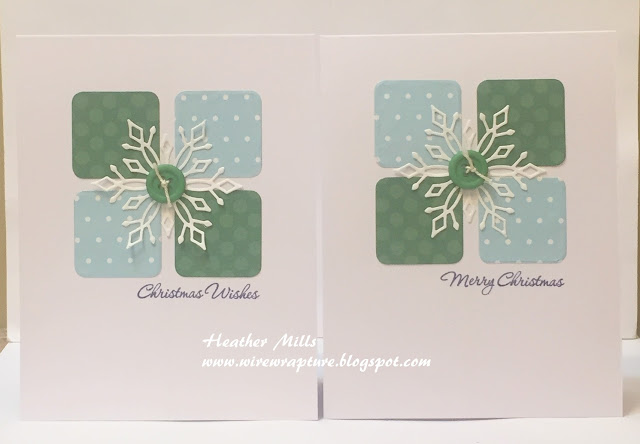 Heather skipped in with these two lovely cards. Such a perfect design for using up little snippets - a great one to CASE I think. And the combination of blue and green patterned paper is perfect, topped with a snowflake and a matching green button - love them!


Boy, that was hard to whittle down this time round - everyone is so talented in the Playground, it gets harder all the time to choose.

And we had one new Playmate this time:

Do please hop over to welcome Nora and comment on her beautiful work.

So, that's my picks, and our new Playmate from Challenge 365, and I do hope they've given you some inspiration for ways in which you can use up some of those snippets.

We had 55 entries and including one new Playmate this time round - a nice steady number of entries!

Time now for the prize draw, which is for the SWALK 'Friendship' stamp and a Gemini 'Stitch Edge Circle' set of dies. And the winner is:


Well done Tina - it seems like ages since you last had a win! Please send me your address, with your full name at the top as well so I can copy and paste or just write straight from the email onto the envelope - for speed and ease. It's also confirmation that you still would like the prize of course and I'll post your prize once I hear from you. Please put Playground Winner or similar in the subject line of your email in case it drops into my junk mail. Email address is on RH sidebar as always.

Remember folks, there's still almost another week to run on Challenge #366 - you can find it HERE. The prize is a Neat and Tangled 'Paint Night' set of stamps - plus the matching set of dies. And do remember that we still have our Guest Designer Karen's wonderful snippets make of a gorgeous wreath as well as a very generous give away - over on her blog HERE.

I'm so sorry I didn't remind you girls to go and check for the winner of Karen's first giveaway for the Snippets Playground (who was Gail Scott). I think Karen will probably post the next winner's name as soon as challenge #366 closes.  That's what threw me as I give myself a week's grace to do the results write-up these days. Once again, huge thanks to Karen for being our GD and also for her commenting on your entries, as well as her generosity and wonderful inspiration.

And more wild life, we've just spotted a fox picked up on our CCTV the other night - having a mooch around the front garden. We've occasionally seen one trotting up and down past the house but not one venturing so close. It's doubtful if it could squeeze under the gap we deliberately had left at the bottom of one of the side gates when the back garden fences were replaced - just enough for a hedgie to get under. Otherwise young Dudley might meet his match!

We've also spotted the little hedgie on CCTV, still coming to feed now and then - but the last time we spotted him 'live' and had an opportunity to capture him was the evening before Dudley's op. - and there was no way I could focus on trying to fit in taking him to the rescue centre when it was all I could do to get Dudley to and from the Vet.

Dudley went into the Vet's animal hospital at 8:30 on Thursday and we collected him at 4pm, so it was a long old day. In fact, they had anticipated we could collect him at 2pm but when I phoned to check, he was still too groggy and they wanted to keep an eye on him for another two hours. He just laid his head against me in the car on the way home and closed his eyes with a sigh of relief. He alternated between dozing in silence and twittering like a little bird all evening, covered with his little fleece blanket - and most of the night. Yesterday was a pretty quiet day as well but today, Saturday, he's bounced back into his usual lively self and the problem now is to stop him from doing 'zoomies' around the house! We've got the stair gates back in place, thankfully they're portable - and Len is carrying him up and down the stairs when needed as he usually bounds up them two at a time. And yup, he came home wearing a cute dark blue onesie. I took the dressing off his wound yesterday as instructed by the Vet - bit shocked at the length of the incision but my guess is they may have played it safe. Of course he has a pretty big shaved patch there, and also a small one on a front leg where the IV was inserted and one on a back leg where they placed the blood pressure monitor. So he certainly looks as if he's been in a bit of a battle.

Len managed to take a photo of him yesterday. I've tried to capture a photo of him standing up showing off his onesie properly - with his lovely plume of a tail poking out of the back end where the poppers are, but no luck yet.

Dudley goes back for a quick check on Monday and then we have a wait a further week for the pathology results and his second follow up appointment. So that will be 11 days after his operation (the weekends got in the way!) and with luck he'll have the stitches removed and we might be able to leave his onesie off. It's working really well and he's quite happy wearing it - although having to undo the poppers and roll it up out of the way every time he needs the toilet is a bit of a palaver, but much better than a cone or similar. 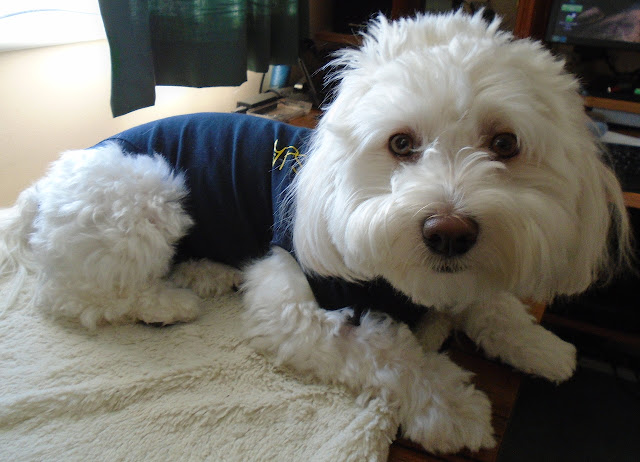 His head looks huge - partly as it's close to the camera but also his body does look so small in comparison once his fluffy coat is flattened! Actually, you can see a 'dip' in the hair on his front right leg where it was shaved for the IV to go in - it looked very red and bruised when he first came home but already it's calmed down a lot.

Edit: Success late Saturday afternoon. Not brilliant but here's Dudley at the door to my craft room watching Len go down the stairs: 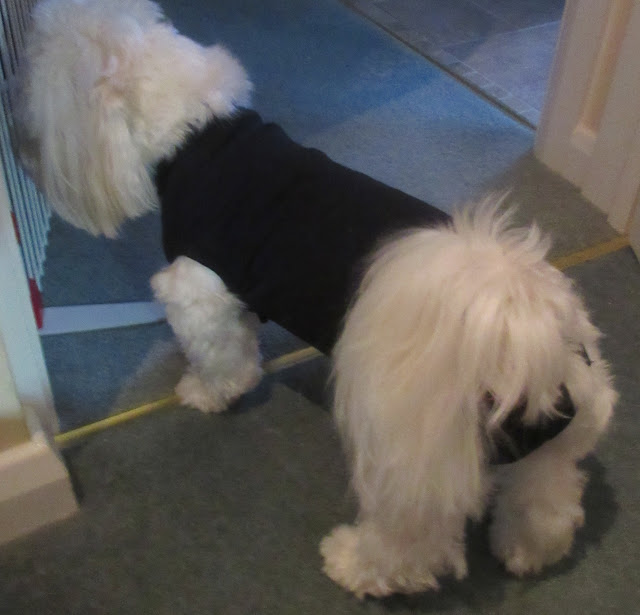 His tail is flopped over covering the cute little strap which goes up onto the back of the top of the onesie (one either side of his tail). The pad at the back is partly to stop the onesie from riding up and also to protect his (ahem) crown jewels area in case that was the operation site. The onesie was supplied new by our vet but they're sold by Amazon as well - made by Medical Pet Shirt and they come in 11 different sizes (His Nibs is an extra small size).

It's going to be a long week and a bit for us until we get the results, but we can't change those and have to be thankful that his op. went off without a hitch.

Both Len and I have been so touched by your concern and the many lovely comments of support. It's meant such a lot to know he's so well loved by people who've never met him. But then, he's that sort of dog - full of personality and a total joy each new day.

Love from Parsnip, a happy wave from Dudley - and of course hugs as always from me,