More ways to use the alcohol ink backgrounds

Whilst making the alcohol ink background for the Simon Says Stamp card I recently posted about, also made a couple of sheets more or less the same - so had some left over to play with using some Memory Box dies. Came up with two cards shown below - and AI stands for Alcohol Ink: 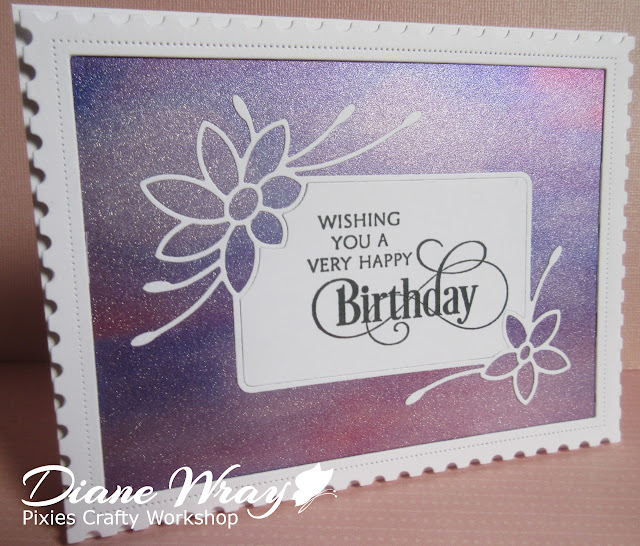 - used Stick-It backed 200gsm white card to die cut the Memory Box 'Starflower Frame' die then popped it onto a rectangle of the background card, adding the white panel from the die cut back into the centre as well and ran the panel through the Cuttlebug using just the cutting plates to press it firmly down

- backed the whole panel with white fun foam and glued it in place onto the card front, finished!

This is a lovely die, a first outing for it although I bought it with possible Christmas cards (poinsettias) in mind  and certainly before I got into sparkly alcohol ink backgrounds. Will have a play again and show what my original idea was - having said that, it's really great for using as I just did! Another example of existing dies in your possession being useful for trying out Jennifer McGuire's Tim Holtz Sparkly AI card stock ideas.

At the same time, I made this card - didn't catch the light as much, should have taken the photo sideways on : 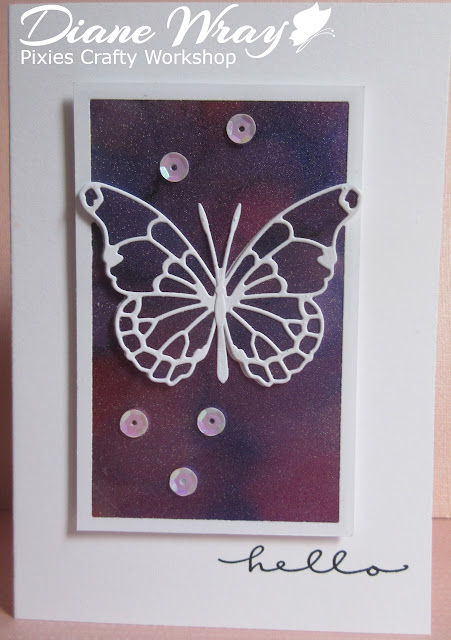 - piece of alcohol ink background made using Tim Holtz 'Sparkle' alcohol ink card stock and a mix of Flamingo Pink, Amethyst and Aqua alcohol inks plus some blending solution ( I know, more of the same - for now!)

- the butterfly frame took a bit of thinking through. When I ordered it a few weeks ago, the image shows what you see on my card front (if you reach into your screen and lift the butterfly's wings up!) - a frame of card with a big flat butterfly sitting just above the centre - attached on either side. However, the die itself doesn't come with a frame, it's more of a panel to just cut a solid butterfly into a background I guess. My way round this was just to measure the 'panel' die and add quarter of an inch to the top and to one side, then use the trimmer to cut a white panel of Stick-It backed card(200gsm)

- and at that point you can go ahead and die cut the Memory Box 'Vivienne Butterfly Silhouette' from said rectangle and end up with exactly what the packet shows - but, it did puzzle me for a while I freely admit, and I bet my explanation wasn't very clear either! Sadly MB didn't even have any examples (even though it's been out for sale since 2017) when I searched, I'm sure there must be some other way of using this lovely die - watch this space kids!

- backed the whole panel with white fun foam and glued it in place onto the card front - just above the sentiment, which had been carefully placed in readiness when I stamped it (darned OCD - no, make that CDO!!)

- and only at that late point in the whole proceedings did I spot that there was a wee dark blob of AI which drew the eye and spoiled the whole 'flow' of the card. So, out came the sequins and I added five (card makes like to work in odd numbers apparently) using Glossy Accents

Or is it? Probably far from it! I have to admit to buying three dies recently from China - it's against many of my principles but I think I certainly do more than my bit to support UK and other Western craft manufacturers and suppliers so I figured I would just dip my toe in the water. In truth, it still doesn't sit easily with me - but I'm amazed to be honest. Price, quality and speed - phew! ANYHOW, one new die from China has led me to need more AI colours from the UK, costing several times more than the die did - so it's a knock on effect. And that, is what I meant when I said 'far from it'!!