It's 100 years ago today since The First World War ended and it seems very fitting that my snippets card for Armistice Day should be a poppy. 'Lest we forget'. 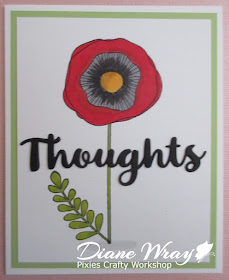 - snippet of pale green card from the snippets folder

- snippet of white card onto which I stamped the poppy using Memento 'Tuxedo Black' ink and two stamps from the Stamping Bella Straight Up' Floral stamp set. Had to do a bit of fiddling and testing using the Misti and the leaf stamp to get it positioned properly but it wasn't too much of a job (in fact, afterwards I sort of wished I hadn't used it anyhow)

- then backed a couple of snippets of black card stock with Stick-It adhesive sheet before die cutting using an Impression Obsession 'Thoughts' die and layering the two together (Note: it's much easier to do this if the bottom die cut is left inside the piece of card so that it holds its shape whilst you press the two together)

I then decided to make a second card along similar lines, using the third stamp in the same set: 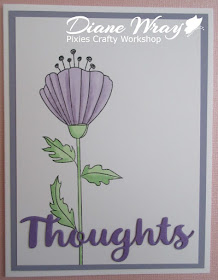 - I used different colours for the flower, which comes with the leaves already part of the same stamp, and toning coloured card for the border layer and a deeper shade for the sentiment, all snippets again of course

Hindsight is a wonderful thing, once the cards were finished ready for the sentiments to be added I realised that square (either 5" or 6") card would have allowed better placement of the sentiment die cuts - more to one side. I did see some wonderful samples using this stamp set at a Dies to Die For event earlier this year, made by the super-talented Faye, and she had made square cards I'm almost sure! However, as is still the case, a certain little white fluffy ball of fun does tend to curtail things and to be honest I was just glad to have made a couple of cards in the first place - never mind re-doing them! I would have liked to also add Glossy Accents to the sentiment words before adding them to the cards - but didn't have the time.

Am also finding that my mind is easily distracted right now (again, blame Dudley) so I don't always think things right through before diving in! 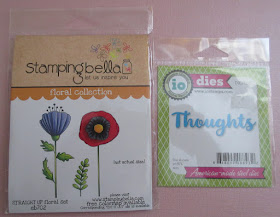 It's a Stamping Bella 'Straight Up' Floral set of stamps plus an Impression Obsession 'Thoughts' die. I won't split this prize so if you play and want to be in the draw remember that you will receive both items - but you can always give one part away to a friend at your end if it's a duplicate or you just don't really want it for yourself!

As always, the Snippets Challenge will run for two weeks and the Playground gates will close at 11am UK time on Saturday 24th November. The gates will open again at midnight UK time on the same day.

Love from Parsnip who is busily making shopping lists for Christmas - thank goodness one of us is organised! Mind you, his lists look suspiciously as if he's gonna set up a cocktail bar in the Playground for the Christmas party!

And I really did try to get a decent photo of Dudley, but he just never keeps still unless he's asleep! Even then, his tail will wag, he will give out little 'woofs' and his paws will move around as if he's playing in his dreams. But, I did manage to catch this photo - he came into my craft room as I was fiddling with the camera to drop a favourite toy beside me before going down on his 'hunkers' asking me to play for a while. So it was a very quick slightly out of focus piccie taken from above - before launching into yet another game of 'throw me the monkey so I can chase it'!!

Love as well from Dudley, and of course from me. By the way, we have to wait until the hair around his eyes grows longer of its own accord, if you trim it when he's a puppy (which we've been tempted to do I admit!) then it just grows back with blunt ends and takes even more time to become long and smoothed down. I guess he looks like he's winking at you here! 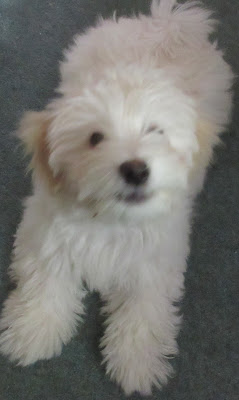 And then I washed his grubby whiskers! A G A I N ☺