I needed a Sympathy card straight after holiday: 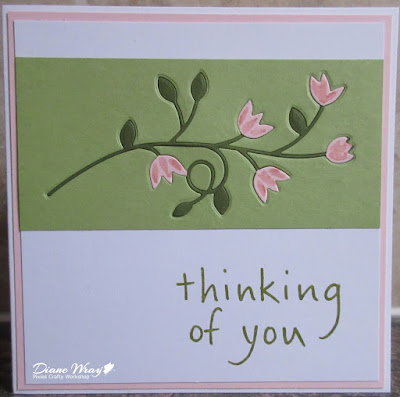 - piece of white card, cut just slightly smaller than the pink layer of card - but not yet glued onto the card front

- then I used a Memory Box die called 'Geneva Vine' to die cut across the green panel, reserving two of the green pieces which fall out in the process

- die cut the same 'Geneva Vine' from a snippet of dark green card and pressed that into the sticky backed aperture, also filled in the two spaces with the light green card

- at this point I added the sentiment using the Misti, SU's 'Old Olive' ink pad and a sentiment from the Stampendous 'Happy Messages' set

- die cut the same die shape from a snippet of the baby pink card and tickled each flower with a pale pink Zig watercolour brush whilst it was still in the die itself, just to add some deeper pink to the flowers for definition

What's different about using the die as I did is that the green single layer die cut piece sits quite embedded, as the backing is cut two layers deep. Then, adding the flowers on top, brings them level with the backing layer. A little point but in real life it certainly adds some dimension.