Filling in time on a wet afternoon

The cards were finished and sitting on my desk waiting for me to write this blog post when I spotted that Bonnie had made a 'not totally dissimilar' card HERE. Bonnie used stamping but it shows that I could be 'on trend' as they say - that would be a first for me!

I made four cards, all the same design and two of them have the backing frame and 'Noel' in gold with the tree in silver - and the other two have the metallics reversed. I like both versions but for some reason the ones with the frame in gold just seem to stand out more - possibly as the frame is 'stronger' in gold than silver: 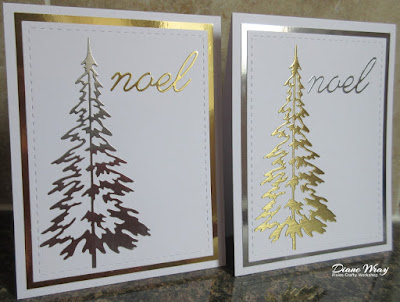 Needless to say the cards were really 'tricky-woo' to photograph!

- piece of white card, die cut using a die from the Lil' Inkers 'Stitched Rectangles' set - and then kept to one side

- then die cut the tree using a NBUS Tim Holtz Sizzix die called 'Woodlands' and either gold or silver metal effect adhesive sheet made by X-Cut, a dream to use

- then placed the tree and the sentiment (I snipped the dangling snowflake off the sentiment for this card) onto the piece of die cut white card and ran it through the Cuttlebug, using the embossing plates and an embossing folder as a 'shim'

- glued the white card layer onto the card front, already nicely decorated with the tree and sentiment

I've had the Sizzix tree dies for ages (comes in a set of two, the one I used is slightly narrower than the other one) and of course now I can't understand why it's taken so long! Love them!

As I've said before, running the piece of card through the Cuttlebug after the die cut pieces were put in place really 'sets' them and also gives a beautiful finish with mirri card or this X-Cut adhesive sheet in particular, almost as if the card has been foiled.