I bet loads of you will already have seen Darnell's post HERE about her 'England Grand Tour - Leg 1'. Here's a little bit more to fill in some gaps.

First of all, Darnell is absolutely everything she is on her blog - funny, dry, bubbly, caring, thoughtful and at times just plain crazy! We local visitors arrived on Monday at the Grand Harbour Hotel, Southampton - by which time our little USA visitor was settled in and ready to play. We had a lovely afternoon and evening just chilling out in the heatwave (bit of a contradiction there!) on the hotel decking area - and no-one got thrown out for misbehaving. Knew it was a good idea to leave Parsnip at home!

Tuesday dawned hot and sunny once again so we went out for a stroll after breakfast before the heat became too much. The intention was to show Darnell the Mayflower Monument, which commemorates the sailing of the Pilgrim Fathers on the Mayflower to the New World in 1620.

On the way we passed three of these fellas: 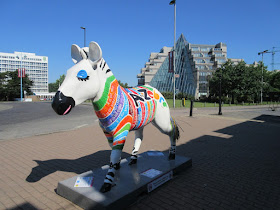 A bit like Bristol did with the sheep, Southampton has loads of differently painted zebras dotted about the town. The building on the right in the background is the hotel where we were based BTW.

I did smile as I remember Julia of WOYWW posting on FB a photo of a truck load of these, white all over and still unpainted, zebras zooming along the motorway - months ago. Obviously getting ready to be prettied up - although at the time no-one had a clue what was going on!

Anyhow, could we heck as like find the monument in Mayflower Park, despite asking the guy in the ice cream kiosk - who just looked blankly at us. We sort of moseyed around with no sighting at all so gave up, and crossed back over the road to walk back to the hotel in the shade. BINGO!! There it was, standing quite shyly back from the road with little in the way of anything to really point you to it! 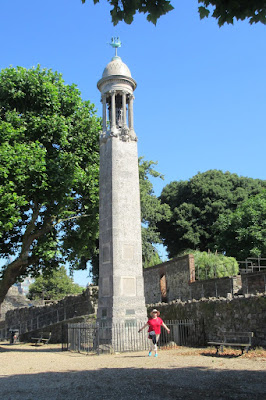 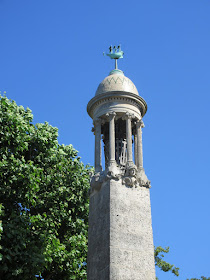 This is a closer look at the top of the monument, with a replica of the Mayflower - very much like a weathervane.

I think we three were almost melting by the time we got back to the hotel, which was really no distance at all!

Then it was time for the 'main event' - lunch for 10 of us. I truly don't think there was ever a lull in the conversations going on - and it was fabulous to meet so many blogging friends actually 'in the flesh'! Most of whom are Snippets Playmates too. I'd already met the lovely Debs a couple of times with Sarn in the very same hotel! 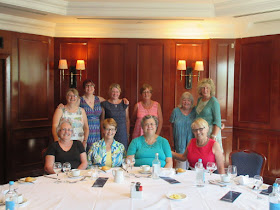 We had a brilliant time and it was such fun learning more about one another and sharing stories - but all too soon we were at late afternoon and it was time for folk to make their homeward journeys. A few eyes filled up - certainly mine did, more than once!

Whilst waiting for Chrissie to pick Darnell up the following morning to take her over to Salisbury - I managed to snatch this photo of Darnell (she's the one wearing the 30lb back pack!). I just love the character of Darnell - feisty and such fun. 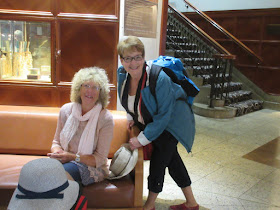 It truly was a wonderful few days but all good things come to an end.

Those of you who have yet to meet Darnell are in for a treat. Those of you who already met her will no doubt know exactly what I mean when I described her earlier. And those of you who for one reason or another haven't been or won't be able to meet her - I hope that sharing this has made you feel a little bit as if you joined in with us in Southampton.